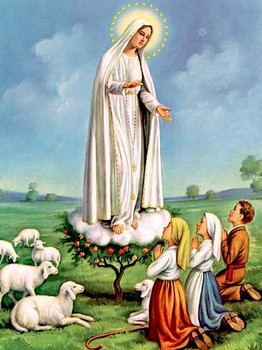 In the Spring of 1916, on the back edge of WWI, before the Russian Revolution and when the world was beginning to spin even more wildly out of control, an angel appeared to 3 shepherd children at Fatima, Portugal. The angel, who called himself the Angel of Portugal, appeared three times, taught the children various prayers and entreated them to penance and to offering sacrifices to the Lord.

After these 3 appearances, a lull of 8 months went by. Then, in 1917, when Lucia was 10, Francisco was 9, and Jacinta was 7, Our Lady appeared to the children, asking them to return to that site on the 13th day of each month for the next 6 months. (She would come 6 times to all the children, and also later to Lucia alone.)

During the first apparition (13 May), Our Lady answered questions from the children about their fates. She said that they would all go to Heaven (but Francisco would have a few Rosaries to say first). She told them that of two of their friends who’d died, one was in Heaven and another was in Purgatory. She then mentioned the war in Europe and told the children to pray the Rosary for peace.

During the second apparition, she told the children to pray what has become known as the “Fatima Prayer” during their Rosaries. When asked, she said that Francisco and Jacinta would be in Heaven soon, but that Lucia would stay to help bring people to Christ.

During the third apparition, three secrets were given to the children.

First, they were shown a vision of Hell.

Second, they were told of the “errors of Russia” and how they would spread throughout the world unless the world mended its ways. To that end, she called for penance and said that Russia should be consecrated to her Immaculate Heart by the Pope and the Bishops in union with him, and that the faithful should receive Communion of reparation in atonement for the sins of the world on the first Saturday of each month (the “First Saturdays” devotion). If these things aren’t done, Russia’s errors would spread, the Church will be persecuted, various nations will be annihilated, and the Holy Father will have much to suffer. She said, though, that in the end, her Immaculate Heart would triumph.

Lucia, warned by her Bishop that the apparitions could be demonic, asked the Lady if she would tell them who she was and if she would perform a miracle to help prove to others that the visions were real. The Lady said she would.

During the 4th apparition, Our Lady gave the children instructions concerning the chapel which was to be built and reassured them of the miracle that would take place.

During the 5th apparition, she said that the promised miracle that all could see would take place during her next visit (on 13 October).

During the last apparition common to all the children, crowds gathered; around 70,000 people sloshed through the mud caused by the heavy rains that had fallen all night to see the promise fulfilled. Mary referred to herself as the “Lady of the Rosary,” mentioned again the chapel that would be built, and said the war would end soon. Suddenly, the dark clouds that obscured the sky parted, revealing the sun as a softly lit disk of spinning silver or an opalescent pearl shade. Thousands and thousands saw the sun spin, dance, throw off many different rays of color — red, yellow, purple, blue light coloring all they saw. Some swore they saw the sun crashing toward the earth. Even secular newspapers reported what happened with the sun and that one could witness the phenomenon without hurting one’s eyes. People who’d gone to the site to mock the children and the faithful found themselves in tears, staring at the sky in amazement, converted to Christ. Then Our Lady disappeared, and St. Joseph, holding the child Jesus, appeared to the children, blessing the world by signing the Cross in the air. This apparition went away, and then Christ and Mary (as Our Lady of Sorrows) appeared, Christ blessing the world as his step-father had done. Then Our Lady appeared alone again, only to Lucia’s eyes, as Our Lady of Mt. Carmel.  After the miracle of the sun, the crowds saw that the muddy, wet fields and their clothing had dried.

Francisco and Jacinta died very young, as Our Lady said. They were beatified in 2000. Lucia joined the Carmelite Order as a nun where, as of 2002, she still lives. In 1944, Our Lady appeared again to Lucia and asked her to write down the Third Secret given to her at Fatima — but not to reveal it until 1960 because “it will be much clearer then.” 1960 came and went, but the secret was not revealed; instead, Sr. Lucia was ordered to never speak to anyone about Fatima.

In the year 2000, the Vatican released its version of the “Third Secret”; that text appears below. The official interpretation of this “Third Secret” is that it referred to the assassination attempt on John Paul II’s life in 1981 and that all of its relevance is in the past.

THIRD PART OF THE “SECRET”

“I write in obedience to you, my God, who command me to do so through his Excellency the Bishop of Leiria and through your Most Holy Mother and mine.

“After the two parts which I have already explained, at the left of Our Lady and a little above, we saw an Angel with a flaming sword in his left hand; flashing, it gave out flames that looked as though they would set the world on fire; but they died out in contact with the splendor that Our Lady radiated towards him from her right hand: pointing to the earth with his right hand, the Angel cried out in a loud voice: “Penance, Penance, Penance!”

“And we saw in an immense light that is God: “something similar to how people appear in a mirror when they pass in front of it” a Bishop dressed in White “we had the impression that it was the Holy Father.”

“Other Bishops, Priests, men and women Religious going up a steep mountain, at the top of which there was a big Cross of rough-hewn trunks as of a cork-tree with the bark; before reaching there the Holy Father passed through a big city half in ruins and half trembling with halting step, afflicted with pain and sorrow, he prayed for the souls of the corpses he met on his way;

“Having reached the top of the mountain, on his knees at the foot of the big Cross he was killed by a group of soldiers who fired bullets and arrows at him, and in the same way there died one after another the other Bishops, Priests, men and women Religious, and various lay people of different ranks and positions.

“Beneath the two arms of the Cross there were two Angels each with a crystal aspergilium in his hand, in which they gathered up the blood of the Martyrs and with it sprinkled the souls that were making their way to God.”

Permanent link to this article: https://luisapiccarreta.com/513-feast-of-our-lady-of-fatima/