5/9 Jesus pours in Luisa so much grace, so much love as to make Luisa surpass all other creatures

5/11 Archbishop Mons. Addazi obtained permission from the Holy Office on May 11, 1963 to transfer the mortal remains of the Servant of God Luisa Piccarreta to inside Saint Mary the Greek Church, with the internment occurring on July 3, 1963

A most curious thing in all the entries of “The Book of Heaven” is that there are no mistakes or corrections anywhere (remember that Luisa had little more than what we would consider a second grade formal education).

These writings in “The Book of Heaven”, made in the year 1904 and presented here in the order given, foretell of the destruction of the Church of St. Cataldo which was destroyed in one of the largest earthquakes in recorded history. Four years later on December 28, 1908 Italy, Messina – The Tenth Most Destructive Known Earthquake on Record in the World (estimated) 7.5mag. Deaths 70,000 to 100,000 from earthquake and tsunami.

The Church of St. Cataldo in the City of Corato was opposite from what is now a corner bar above which is where Luisa was born. If one is standing and facing the building where Luisa lived most of her life and where her bed still remains the location of the Church would be to the left at the end of an alley which ends in an intersection.

The City of Corato “laid hands” on the Church of St. Catalto and leveled it after it was damaged by the earthquake and it is currently being used for parking and on certain days is used as an open air market. Luisa solemnly said that in time it must be reopened so that indicates that in the future, it must be rebuilt. 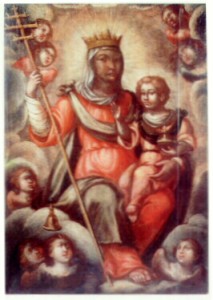 When the soul is identified with the Humanity of Jesus none of her works are dispersed. Obedience and the Saints want Luisa to remain on earth as victim.
…Now, while they were saying this, I said to myself: ‘It seems that everyone is against me: obedience does not want me to die; these are praying the Lord not to take me – what do they want from me? I don’t know why they want me to be on this earth almost by force, far away from my highest Good’; and I was all afflicted. While I was thinking of this, Jesus told me: “My daughter, do not want to afflict yourself. The things of the world are most sad, and they get worse and worse. If the point comes for Me to give free vent to my Justice, I will take you, and then I will no longer listen to anyone.”

The promise of Luisa if she is allowed to die.
In the presence of the Most Holy Trinity, of the Queen Mother, Mary Most Holy, of my guardian Angel and of the whole Celestial Court, and in order to obey my confessor, I promise that if the Lord, by His infinite mercy, should give me the grace of letting me die, when I find myself together with my Celestial Spouse, I will pray and plead for the triumph of the Church and the confusion and conversion of Her enemies; that the Catholic party may triumph in our country, and that the church of St. Cataldo may be reopened for service: that my confessor be freed of his usual sufferings, with a holy freedom of spirit and the sanctity of a true apostle of Our Lord; and that – always if the Lord permits it – I will go to him, at least once a month, to confer about celestial things and things pertaining to the good of his soul. I promise all this, for my part, and I swear.

Luisa speaks with some priests about the church of St. Cataldo.
I had forgotten to say what I am about to write, which I will say now out of obedience, although these are not sure things, but uncertain, because the presence of Our Lord was missing.
I was outside of myself, and I seemed to find myself inside a church in which there were several venerable priests, and also souls from Purgatory and holy people, conversing among themselves about the church of St. Cataldo, saying that almost with certainty it would be obtained. On hearing this, I said: ‘How can this be? The other day it was rumored that the Chapter had lost the cause. So, through the tribunal it could not be obtained, the town council does not want to give it, and you are saying that it will be obtained?’ And they added: “In spite of all these difficulties, indeed it is not lost; and even if they reach the point of laying hands on it to knock it down, it still cannot be considered as lost, because St. Cataldo will know well how to defend his temple. However, poor Corato if they arrive at this!” But while saying this, they repeated: “They have taken away the first things; the Crowned Lady has already been transported to his house. You, go before Our Lady and pray to Her that, having started the grace, She would fulfill it.” I went out of that church to go pray, but as I was doing this, I found myself inside myself.

Shanrahan Cemetery: Site of Cataldo’s monastery
Following the arrival of St. Patrick, Holy men established small monasteries throughout Ireland. It is not surprising then, to learn that in the seventh century a Holy man named Cathal, having studied at the University of Lismore, made his way through the pass in the ancient SlieveCua mountains and arrived at Rathan where he established his monastic settlement. He was appointed Bishop of the area even though it must be remembered that in those early years of the Christian Church this did not mean that he was in charge of a diocese.After some years at Shanrahan, Cathal set out on a pilgrimage to the Holy Land. On his return journey he was shipwrecked off the coast of Southern Italy. There he realized that the people of the area had reverted to paganism, so he resolved to stay amongst them in an effort to reconvert them to Christianity.

St. Cataldo
Within a few years the people of Taranto in Southern Italy had selected Saint Cataldo (in Latin, Cathaldus or Cataldus) as their Bishop. Today the popularity of Saint Cathaldus in Southern Italy is equal to, if not greater than, the popularity of St. Patrick in Ireland. Over one hundred and fifty churches are dedicated to him in that country and the Cathedral-Basilica in Taranto proudly bears his name. He is the Saint Protector of Corato (Bari), of Gangi (Palermo) and of many other places. A town in Sicily is called San Cataldo.In 1071, during the reconstruction of the Basilica in Taranto, the tomb of Cathaldus was discovered and opened. With his body was found a gold cross bearing his name and the word Rathcau.

Cathedral of Saint Cataldo, Taranto, Italy
In 1963, Fr. Frank Mackin, a Jesuit priest from Boston, came to Clogheen to research his family history. Following that visit, he went to Taranto to research the life of the Irish Saint. He was amazed that there was neither a statue nor a stained glass window commemorating the Irish Saint in the Clogheen Church even though it was obvious from the writings of the Historian Fr. Everard – Clogheen’s Parish priest in the early years of the twentieth century – and from local tradition, that Clogheen people were aware of the historic link between Taranto and Shanrahan. He resolved to do something about it. In 1986 the Mackin family of America, Ireland and Australia installed a beautiful Stained Glass window in St. Mary’s Catholic Church, on Clogheen’s Main Street. The window, on the west wall of the church, depicts the life of St. Cathaldus in Shanrahan, his journey to the Holy Land and his being shipwrecked off the coast of Southern Italy.

In 1996, an important delegation from Taranto in Italy, accompanied by Signor Enzo Farinella from the Italian Embassy in Dublin representing the Italian Ambassador, came to Clogheen to re-establish the historic link between Shanrahan and Taranto. The delegation was formed by Mons. Dr. Nicola Di Comite, Vicar General and Archdeacon of the Metropolitan Chapter of Taranto; Mons Marco Morone, Parish Priest of the Basilica-Cathedral ‘San Cataldo’ and Don Cosimo Quaranta, secretary of theMetropolitan Chapter.

During concelebrated mass on Sunday September 22,1996 Monsignor Michael Olden gave the homily on the subject of Saint Cathaldus. Then Mons Nicola Di Comite addressed the people of Clogheen and presented his Lordship most Rev. Dr. William lee, Bishop of Waterford and Lismore with a gold replica of the Cross of St. Cathaldus.

At the time of writing, it is planned that a plaque be erected at Shanrahan to commemorate the visit of the Italian delegation and the link between Shanrahan in Clogheen and Taranto in Southern Italy.

In the Irish office of this great Saint (Gill and Son, Dublin) Die viii, Martii, p. 18, we read:

Permanent link to this article: https://luisapiccarreta.com/510-feast-of-st-cataldothe-promise-of-luisa/