5/8 Feast of Our Lady of America

5/3 The Mission of Living in the Divine Will 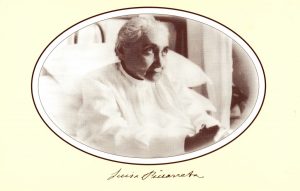 From the writings of the Servant of God, Luisa Piccarreta, The Little Daughter of the Divine Will

I was thinking about the many things that my beloved Jesus told me on His Most Holy Will, and some doubts came back to me – that, who knows, it might really not be necessary to say everything, or, that some things were not necessary. But Jesus, wanting to lovingly resolve my doubts and make me know the mission He entrusts to the one who is to make His Divine Will known – having chosen for this the misery that I am, to my great stupefaction and confusion – continuing His holy instructions on this matter, told me: “My daughter, every mission is to be connected to the office of executing it, and therefore it must be carried out omitting nothing of that which belongs to it. In fact, every mission which is destined for the good of others, has its own particular gifts, graces, riches and qualities, which are useful for its execution.

My Humanity received from my Divinity the mission of the salvation of souls and the office of Redeemer – that is, to redeem them from the slavery of sin and from eternal death. In order to carry out this office, I was given their souls, their pains, their satisfactions. Therefore, I enclosed within Myself everything from everyone; and if my Humanity had neglected to enclose in Itself just one soul, one satisfaction, the office of Redeemer would not have been complete – I would not have enclosed in Myself all the graces, the goods and the light which it was necessary to give to each soul. And even though not all of the souls are saved, this says nothing. On my part, I had to enclose the goods of all, so that I might have necessary and superabundant graces for all, in order to be able to save all. This was convenient to Me for the decorum and the just honor of my office as Redeemer.

Look at the sun above your horizon: it contains so much light as to be able to give light to all; and even though not all might want to enjoy its light, by its unique office as sun, it possesses even the light that creatures might refuse. This was convenient to the Sun, because it was created by God as the unique sphere which was to warm and embrace the earth with its light. Each created being has its own office to carry out, and that office is unique – linked to that being, to that creature. In order to execute it well, it is necessary that the one who is to carry out the office entrusted to her, contain so much of that good – good which she must give to others according to the mission for which she was created – that as much of it as she gives, it is never exhausted, not even by one atom.

This was even more convenient to Me, Who was to be the new Sun of the souls, and Who was to give light to all and embrace all with my light, to bring them all to the Supreme Majesty, offering to this Divine Majesty an act from Myself which would contain all acts, and to make the superabundant light of my Divinity descend upon all in order to rescue them.

In addition to Me, there is my Celestial Mama, who received the unique mission as the Mother of a God Son, and the office of Co-Redemptrix of mankind. For her mission of Divine Maternity, She was enriched with so much grace, that all other creatures combined, both celestial and terrestrial, would never be able to equal Her. But this was not enough to draw the Word into her maternal womb; it was necessary that the Mother put in action all this abyss of graces and gifts, by embracing all creatures, loving them, repairing and adoring the Supreme Majesty for all; in such a way as to accomplish Herself, all that the human generations owed to God. Therefore, in her virginal Heart She had an inexhaustible vein for God and for all creatures. When the Divinity found in this Virgin compensation for the love of all, It felt enraptured, and formed in Her Its Conception – that is, the Incarnation of the Word. And as She conceived Me, She took on the office of Co- Redemptrix, and shared and embraced together with Me, all the pains, the substitutions, the reparations, the maternal love, for all. In the Heart of my Mother there was a fiber of maternal love for each creature. This is why, in truth and with justice, when I was on the Cross, I declared Her Mother of all. She ran together with Me in the love, in the sufferings – in everything; She never left Me alone. If the Eternal One had not placed so much grace in Her as to be able to receive, alone, the love of all – He would never have moved from Heaven to come down upon earth and redeem mankind. Here is the necessity, the convenience – that She had to embrace and surpass everything, as befitting the mission of the Mother of the Word.

When an office is unique, as a consequence, nothing must escape the one who has it as mission. He must have everything under his eyes, so as to be able to offer the good he possesses; he must be like a true sun that can give light to all. So were I, and my Celestial Mama.

Now, your mission of making known the Eternal Will is braided with mine and with that of my dear Mother. And since it has to serve for the good of all, it was necessary to centralize the Eternal Sun of my Will into one creature; so that, as a unique mission, this Sun might let its rays blaze from her, and all might take the good of Its Light. This implies that, for the decorum and honor of my Will, I had to pour into you, as bearers and preparations, such graces, light, love and knowledge of It, as to befit the residence of the Sun of my Will. Even more, you must know that, just as my Humanity, in Its office of Redeemer, conceived all souls, the same was to happen in you, in your mission and office to make my Will known and reign: as you continue to do your acts in my Will for all, all creatures remain conceived in your will; and as you keep repeating your acts in Mine, you form many sips of Life of Divine Will, in order to be able to nourish all the creatures which are as though conceived in yours, by virtue of my Will. Do you not feel how, in my Will, you embrace all, from the first to the last creature which is to exist upon earth; and for all, you would want to satisfy, love, please this Supreme Will, binding It to all, removing all obstacles that prevent Its dominion in the creatures – making It known to all; and even with sufferings, you expose yourself to satisfy for all, this Supreme Will, which so much loves to be known and to reign in the midst of creatures?

To you, Firstborn Daughter of my Divine Will, it is given to make known the qualities, the value, the good It contains, and Its eternal sorrow of living unknown – hidden, in the midst of the human generations; even more, despised and offended by the evil ones, and placed by the good ones at the level of the other virtues, as if It were a little light which is lit by men – as virtues are in comparison with my Will – and not the Eternal Sun that my Will is.

The mission of my Will is the greatest that can exist: there is no good which does not descend from It; there is no glory which does not come from It. Everything is centered in It: Our interior Works and those which We have delivered; the Creation of the angels, of the world, of men; all virtues, all merits, all predestinations, all goods, all the glory of the chosen ones, all the mysteries of the infinite love, which are still unknown to man; and the past, the present, the future – all in one Act and in act, and in one single point.

Therefore, be attentive, and do not want to waste time with doubts or uncertainties. Everything I told you for this mission was necessary – not for you, but for the honor, the glory, the knowledge and the sanctity of my Will and of Its dominion in the creatures. And since my Will is one, one was to be the creature to whom I had to entrust It, and through whom It would make Its rays blaze, to do good to all.”

Permanent link to this article: https://luisapiccarreta.com/5-3-the-mission-of-living-in-the-divine-will/