4/6 The Day of Jesus in the Eucharist

St. Vincent Ferrer is the patron saint of builders because of his fame for “building up” and strengthening the Church:

through his preaching, missionary work, in his teachings, as confessor and adviser.

At Valencia in Spain, this illustrious son of St. Dominic came into the world on January 23, 1357. In the year 1374, he entered the Order of St. Dominic in a monastery near his native city. Soon after his profession he was commissioned to deliver lectures on philosophy. On being sent to Barcelona, he continued his scholastic duties and at the same time devoted himself to preaching. At Lerida, the famous university city of Catalonia, he received his doctorate. After this he labored six years in Valencia, during which time he perfected himself in the Christian life. In 1390, he was obliged to      accompany Cardinal Pedro de Luna to France, but he soon returned home.

When, in 1394, de Luna himself had become Pope at Avignon he summoned St. Vincent and made him Master of the sacred palace. In this capacity St. Vincent made unsuccessful efforts to put an end to the great schism. He refused all ecclesiastical dignities, even the cardinal’s hat, and only craved to be appointed apostolical missionary. Now began those labors that made him the famous missionary of the fourteenth century. He evangelized nearly every province of Spain, and preached in France, Italy, Germany, Flanders, England, Scotland, and Ireland.

Numerous conversions followed his preaching, which God Himself assisted by the gift of miracles. Though the Church was then divided by the great schism, the saint was honorably received in the districts subject to the two claimants to the Papacy. He was even invited to Mohammedan Granada, where he preached the gospel with much success. He lived to behold the end of the great schism and the election of Pope Martin V. Finally, crowned with labors, he died April 5, 1419.

His feast day is April 5.

NOTE: When she was eighteen, Luisa became a Dominican Tertiary taking the name of Sr. Maddalena. She was one of the first to enroll in the Third Order, which her parish priest was promoting. Luisa’s devotion to the Mother of God was to develop into a profound Marian spirituality, a prelude to what she would one day write about Our Lady.

At Luisa’s death a sort of bib was placed on Luisa’s breast, with the letters FIAT and the cross of the Dominican Tertiaries”. 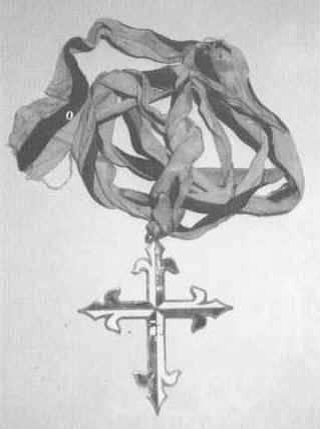 The cross of the Dominican Tertiaries which belonged to Luisa Piccarreta and is now in Fr. Bernardino’s possession

Obedience prevents her from conforming to Justice.

As I was in my usual state, I found myself outside of myself, and I seemed to be going around the earth.

Oh! how inundated it was with all sorts of iniquities! It is horrifying to think about it! Now, while going around, I arrived some place and I found a priest of holy life, and in another place a virgin of unblemished and holy life. We gathered, the three of us together, and we began to converse about the many chastisements that the Lord is sending, and about the many others that He keeps prepared. I said to them:

‘And you, what do you do? Have you perhaps conformed to Divine Justice?’ And they: “Seeing the strict necessity of these times, and that man would not surrender even if an apostle came out, or if the Lord sent another St. Vincent Ferrer who, with miracles and prodigious signs, might induce him to conversion; on the contrary, seeing that man has reached such obstinacy and a sort of madness, such that the very power of miracles would render them more incredulous – invested by this most strict necessity, for their good, in order to arrest this rotten sea that inundates the face of the earth, and for the glory of our God, so offended, we have conformed to Justice. Only, we are praying and offering ourselves as victims, so that these chastisements may turn out for the conversion of the peoples. And you, what do you do? Have you not conformed with us?” And I: ‘Ah, no! I cannot, because obedience does not want it, even though Jesus wants me to conform; but since obedience does not want it, it must prevail over everything, and I am forced to be always in contrast with blessed Jesus, and this afflicts me very much.’ And they: “When it is the obedience, surely one must not adhere.”

After this, finding myself inside myself, I saw dearest Jesus for just a little, and I wanted to know where that priest and that virgin were from, and He told me that they were from Peru

Permanent link to this article: https://luisapiccarreta.com/45-feast-day-of-st-vincent-ferrer/