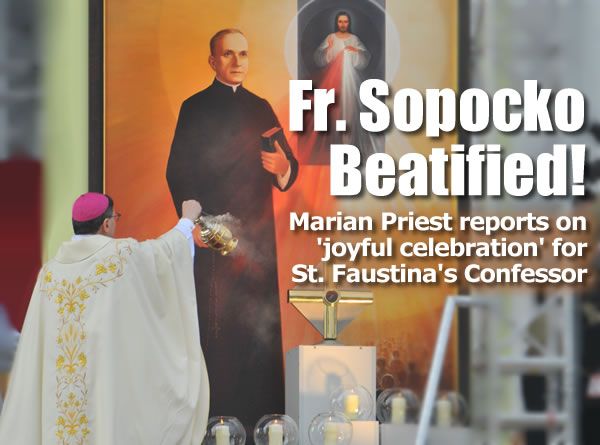 The following is from Divine Mercy: A Guide from Genesis to Benedict XVI (Marian Press), by Robert Stackpole, STD. In this excerpt, Dr. Stackpole discusses the role played by the Rev. Michael Sopocko — St. Faustina’s confessor and spiritual director — in putting the Lord’s requests to Faustina into action. Father Sopocko was beatified Sept. 28, 2008. His feast day is Wednesday, Feb. 15. The more that Fr. Sopocko read St. Faustina’s Diary, as it flowed from her pen week by week, the more impressed he became by this message. However, he was still not entirely convinced of the authenticity of her revelations. After all, Fr. Sopocko was a well-trained theologian, and some of the things that Sr. Faustina wrote were so striking that he wondered whether they were entirely orthodox. First, Faustina claimed that Jesus had insisted that God is not only merciful to sinners — in fact, in a sense, He is even more merciful to sinners than to the just. Faustina wrote:

All grace flows from mercy … even if a person’s sins were as dark as night, God’s mercy is stronger than our misery. One thing alone is necessary: that the sinner set ajar the door of his heart, be it ever so little, to let in a ray of God’s merciful grace, and then God will do the rest (Diary, 1507).

Jesus said to her:

Let the greatest sinners place their trust in My mercy. They have the right before others to trust in the abyss of My mercy. … Souls that make an appeal to My mercy delight Me. To such souls I grant even more graces than they ask (Diary, 1146).

Clearly, the message of Christ to Sr. Faustina was a message of extravagant love: He said He pours out a veritable ocean of graces upon contrite souls who come to Him with trust — even more than they ask. In fact, He has a special compassion for the worst sinners, because they are most in need of His mercy. Jesus also promised to Sr. Faustina that the message of Divine Mercy, and its spread throughout the world, would be a harbinger of His Second Coming to the earth to bring the final triumph of the kingdom of God:

Speak to the world about My mercy; let all mankind recognize My unfathomable mercy. It is a sign for the end times; after it will come the day of justice. … You will prepare the world for My final coming (Diary, 848 and 429).

Jesus said all this not to frighten Faustina and those who would read these messages, but to convince them of the urgency of this evangelistic work of mercy. Jesus had promised in the Gospels that the good news of God’s merciful love would first be preached throughout the whole world before the end times would come (see Mk 13:9). The spread of The Divine Mercy message seems to play an important role in the fulfillment of that prophecy:

Today I am sending you with My mercy to the people of the whole world. I do not want to punish aching mankind, but I desire to heal it, pressing it to My merciful Heart. I use punishment when they themselves force me to do so; My hand is reluctant to take hold of the sword of justice. Before the Day of Justice, I am sending the Day of Mercy. … I am prolonging the time of mercy for the sake of [sinners]. But woe to them if they do not recognize this time of My visitation (Diary, 1588 and 1160).

In His messages to St. Faustina, Jesus elaborated on another prophecy He had made in the Gospels about the end times: the prophecy about the “sign” that would appear in the heavens just prior to His return (Mt 24:30). Jesus told her it would be a final sign of mercy for the world, a final call to repentance and forgiveness before the Day of Judgment:

Write this: Before I come as the just Judge, I am coming first as the King of Mercy. Before the day of justice arrives, there will be given to people a sign in the heavens of this sort: All light in the heavens will be extinguished, and there will be great darkness over the whole earth. Then the sign of the cross will be seen in the sky, and from the openings where the hands and the feet of the Savior were nailed will come forth great lights which will light up the earth for a period of time. This will take place shortly before the last day (Diary, 83).

Further, all of this should be considered in the broader scriptural context of how we will be judged on the Last Day, based on how we have shown mercy to others out of love for Jesus (see Mt 25:31-46). As Jesus told St. Faustina, “I demand from you deeds of mercy, which are to arise out of love for Me” (Diary, 742). Father Sopocko was most amazed, however, by one of our Lord’s messages to Sr. Faustina above all the others. Consequently, he made it the final testing-ground of the authenticity of all her revelations. This testing-ground was the claim that “mercy is the greatest attribute of God.” Jesus had actually said this to Faustina several times, but one time he said it in a message that was intended directly for Fr. Sopocko — which certainly made him pay close attention! Jesus said to her:

I desire that the first Sunday after Easter be the Feast of Mercy. Ask of my faithful servant [Fr. Sopocko] that on this day, he tell the whole world of My great mercy; that whoever approaches the Fount of Life on this day will be granted complete remission of sins and punishment. Mankind will not have peace until it turns with trust to My mercy. … My Heart rejoices in this title of Mercy. Proclaim that mercy is the greatest attribute of God. All the works of My hands are crowned with mercy (Diary, 300).

Father Sopocko’s response to this message is found in his own recollections, written some years later. He wrote:

There are truths of the faith which we are supposed to know and which we frequently refer to, but we do not understand them very well, nor do we live by them. It was so with me concerning the Divine Mercy. I had thought of this truth so many times in meditations, especially during retreats. I had spoken of it so often in sermons and repeated in the liturgical prayers, but I had not gone to the core of its substance and its significance for the spiritual life; in particular, I had not understood, and for the moment I could not even agree, that Divine Mercy is the highest attribute of God, the Creator, Redeemer, and Sanctifier. It was only when I encountered a simple holy soul who was in close communion with God, who, as I believe, with divine inspiration told me of it, that she impelled me to read, research, and reflect on this subject. … I began to search in the writings of the Fathers of the Church for a confirmation that this is the greatest of the attributes of God, as Sister Faustina had stated, for I had found nothing on this subject in the works of more modern theologians. I was very pleased to find similar statements in St. Fulgentius, St. Idelphonse, and more still in St. Thomas and St. Augustine, who, in commenting on the Psalms, had much to say on Divine Mercy, calling it the greatest of God’s greatest attributes. From then onwards, I had no serious doubts of the supernatural revelations of Sister Faustina (Tarnowska, p. 167, 201).

With all reasonable doubt removed, Fr. Sopocko began putting the Lord’s requests to Faustina into action. First, he commissioned an image of The Divine Mercy to be painted. Then, for the Sunday after Easter in 1935, he had this image displayed over the famous Ostra Brama gate to the city of Vilnius, and in the nearby church, he preached the message of mercy to the Catholic populace. Sister Faustina was given permission to be there, too. And toward the end of the service, when the priest took the Blessed Sacrament to bless the people, she saw the Lord Jesus Himself, as He is represented in the Image of Mercy, and Christ Himself gave His blessing while the rays from His Heart extended over the whole world. This event marked the beginning of the spread of the great devotion to The Divine Mercy, a devotion that is now having a profound impact upon the Church in our time. However, at first it did not spread rapidly. Rather, it spread slowly and steadily all over Poland, assisted by the grace of God in the hearts of the people. Father Sopocko saw very little of Sr. Faustina after that great exposition of the Image at the Ostra Brama gate. She remained in Vilnius for another year, but then she was transferred to Cracow. Nevertheless, she remained in contact with Fr. Sopocko, and continued to write her Diary: not so much for him, but as Jesus said, she was to be the “apostle” and “secretary” of His mercy for the whole world. Sister Faustina lived for only two more years. Her body was gradually ravaged by tuberculosis, and she was not spared any of the terrible sufferings caused by that disease in its final stages. The last chapter in her life became one of extreme suffering. She offered up all her sufferings in union with Christ’s Passion for mercy upon all lost sinners, and especially those near death. She prayed: “Transform me into Yourself, O Jesus, that I may be a living sacrifice, and pleasing to You. I desire to atone at each moment for poor sinners” (Diary, 908). And Jesus responded to her prayers:

Know, my daughter, that your silent, day-to-day martyrdom in complete submission to My will ushers many souls into heaven. And when it seems to you that your suffering exceeds your strength contemplate My wounds (Diary, 1184).

Father Sopocko visited her in late September 1938, just 10 days before she died. He always brought her news of the printing and dissemination of the Image, and of the spread of the devotion. But this time she had very little to say. As he later recalled, she was just too busy “communing with her heavenly Father.” Sister Faustina died on October 5, 1938, but her mission was far from over. In fact, it was only just beginning. “My mission will not come to an end upon my death,” she had said in her Diary, “[for] I will draw aside for you the veils of heaven to convince you of God’s goodness” (281).

+ + + Robert Stackpole, STD, is director of the John Paul II Institute of Divine Mercy. You can order Divine Mercy: A Guide from Genesis to Benedict XVI (Marian Press) through our online gift shop.

Permanent link to this article: https://luisapiccarreta.com/41-blessed-father-michael-sopocko-st-faustinas-confessor-and-spiritual-director/