3/4 Today is the 69th Anniversary of the pious transit of the Servant of God, Luisa Piccarreta to Heaven

69th Anniversary of the pious transit of the Servant of God Luisa Piccarreta. 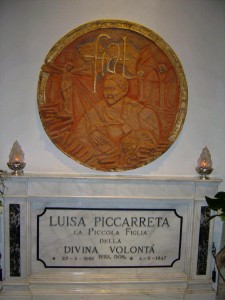 On July 3, 1963 the mortal remains of the Servant of God Luisa Piccarreta, the Little Daughter of the Divine Will, were definitively laid to rest in the Church of Santa Maria Greca in Corato.

The Last Words of Luisa Piccarreta,

“Now I die with greater contentment, because the Divine Will has consoled me more than usual with Its presence in these last few moments of my life.

“Now I see a long, beautiful and spacious road, all illuminated by an infinite number of resplendent suns – Oh, yes, I recognize them! They are all my acts done in the Divine Will!

“The soul who dies united to My Will (Jesus speaking to Luisa), upon entering into My Rest, will find not only the heavenly doors open, but all of Heaven reaching down to greet the new-comer, honoring My Will which has formed Its Life in the soul.

“What can I tell you (Luisa) about the feasting among the Blessed when they see this soul that has lived its life in the Divine Will, with its every word, thought and act, all adorned with as many Suns as its acts, all varying in brightness and beauty? So innumerable are the little divine streams touching all the Blessed that heaven cannot contain all the blessings, and they flow down even upon the earth for the benefit of the pilgrim souls.

“Yes, My daughter (Luisa), My Will is the greatest thing that exists. It is the secret to finding the light, sanctity and greatest spiritual treasures. It is the secret to knowing every good thing, but because It is not intimately known, It is neither valued nor loved as It merits. It is your job to know, love and make It known to all disposed souls.” 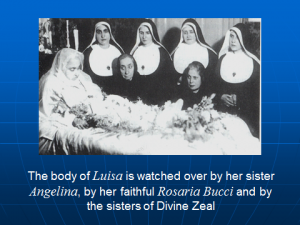 “Luisa’s death created an atmosphere of veneration mingled with fear. No one dared touch her. Aunt Rosaria and Angelina had been taken out of Luisa’s room crying. I attempted to lay her out on the bed but the task was beyond me.

Either her legs would bend or her mouth would open, as if she wanted to say: ‘let me be’. Then I suggested to those present, including her niece Giuseppina, that we change her clothes immediately, before the stiffness set in. This is what we tried to do. Then we took her into the next room, where a sort of bier had been prepared, all in white. What

astonished me most was that in carrying Luisa I had the impression that she was as light as a feather. Hence I understood how it was that very often when Aunt Rosaria was making her bed, she would carry her with extreme ease to her wheel-chair.

A sort of bib was placed on Luisa’s breast, with the letters FIAT and the cross of the Dominican Tertiaries“.

The Holy Death of Luisa

Luisa died at the age of eighty-one years, ten months and nine days, on March 4, 1947, after a fortnight of illness, the only one diagnosed in her life, a bad attack of pneumonia. She died at the end of the night, at the same hour when every day the priest’s blessing had freed her from her state of rigidity. Archbishop Francesco Petronelli (May 25, 1939-June 16, 1947) archbishop at the time. Luisa remained sitting up in bed. It was impossible to lay her out and – an extraordinary phenomenon – her body never suffered rigor mortis and remained in the position in which it had always been. Hardly had the news of Luisa’s death spread, like a river in full spate, all the people streamed into her house and police

intervention was necessary to control the crowds that flocked there day and night to visit Luisa, a woman very dear to them. A voice rang out: “Luisa the Saint has died“. To contain all the people who were going to see her, with the permission of the civil authorities and health officials, her body was exposed for four days with no sign of corruption.

Luisa did not seem dead, she was sitting up in bed, dressed in white; it was as though she were asleep, because as has already been said, her body did not suffer rigor mortis. Indeed, without any effort her head could be moved in all directions, her arms raised, her hands and all her fingers bent. It was even possible to lift her eyelids and see her shining

eyes that had not grown dim. Everyone believed that she was still alive, immersed in a deep sleep. A council of doctors, summoned for this purpose, declared, after attentively examining the corpse, that Luisa was truly dead and that her death should be accepted as real and not merely apparent, as everyone had imagined.

Luisa had said that she was born “upside down”, and that therefore it was right that her death should be “upside down” in comparison with that of other creatures. She remained in a sitting position as she had always lived, and had to be carried to the cemetery in this position, in a coffin specially made for her with a glass front and sides, so that she could be seen by everyone, like a queen upon her throne, dressed in white with the Fiat on her breast. More than forty priests, the

chapter and the local clergy took part in the funeral procession; the sisters took turns to carry her on their shoulders, and an immense crowd of citizens surrounded her: the streets were incredibly full; even the balconies and rooftops of the houses were swarming with people, so that the procession wound slowly onwards with great difficulty. The funeral rite of the little daughter of the Divine Will was celebrated in the main church by the entire chapter. All the people of Corato followed the body to the cemetery. Everyone tried to take home a keepsake or a flower, after having touched her body with it; a few years later, her remains were translated to the parish of Santa Maria Greca.

In 1994, on the day of the Feast of Christ the King, in the main church, Archbishop Carmelo Cassati, in the presence of a large crowd including foreign representatives, officially opened the beatification cause of the Servant of God Luisa Piccarreta.

Seventh Hour of the Passion

From 11 PM to Midnight

Third Hour of Agony in the Garden of Gethsemani

…my sweet Jesus, then You will give your very Most Holy Humanity to my soul, so that, in looking at me, You may see me through Yourself; and in looking at Yourself, You may find nothing for which to judge me. Then You will bathe me in your Blood; You will clothe me with the white garment of your Most Holy Will; You will adorn me with

your Love, and giving me the last kiss, You will let me take flight from earth unto Heaven. And what I want for myself, do it for all the agonizing; clasp them all in your embrace of love, and giving them the kiss of their union with You, save them all and allow no one to be lost!….

Jesus wants to delight in reflecting Himself in Luisa, who is helped by the Most Holy Virgin.

This morning, as soon as He came, my most beloved Jesus told me: “My daughter, all your pleasure must be in reflecting yourself in Me. If you do this always, you will portray all of my qualities, my physiognomy and my very features within yourself; and I, in return, will find all my taste and highest contentment in delighting in reflecting

Having said this, He disappeared, and I was meditating in my mind on the words He had just spoken to me. All of a sudden He came back, placing His holy hand on my head; and turning my face toward Him, He added: “Today I want to delight a little bit by reflecting Myself in you.”

A shiver ran about my whole waist – such a fright as to feel I was dying, because I saw that He was staring at me, wanting to delight in my thoughts, gazes, words, and in all the rest, by reflecting Himself in me. I kept repeating in my interior:

‘Oh! God, am I an object fit for letting You take delight, or for embittering You?’ In the meantime, our dear Queen Mama came to my help, carrying a pure white garment in Her hands, and all loving, She told me: “Daughter, do not fear; I Myself want to make up for you by clothing you with my innocence, so that, in reflecting Himself in you, my Son may find the greatest delight that can be found in a human creature.” So She clothed me with that garment and

She offered me to my dear Good, Jesus, telling Him: “Accept her out of regard for me, O dear Son, and delight in her.” So every fear went away from me, and Jesus delighted in me, and I in Him.

All things have their origin from nothing. Necessity of rest and of interior silence.

…, my beloved Jesus transported me inside a garden in which there were many people preparing themselves to attend a feast, but only those who received a uniform were able to attend, and few were those who received this uniform. A great yearning arose in me to receive one, and I did so much that I obtained the intent. So, as I reached the place in which one would receive it, a venerable matronly woman clothed me in white first, and then placed on me a pale blue shoulder band on which a medal was hanging with the imprint of the face of Jesus. While being a face, it was also a mirror, and in looking at it, one would detect the slightest stains, which the soul, with the help of a light coming from within that face, could easily remove. It seemed to me that that medal contained a mysterious meaning. Then she took a mantle of finest gold and covered me all over. It seemed to me that dressed in this way I could compete with the virgins in Heaven. While this was happening, Jesus told me: “My daughter, let us go back to see what men are doing; it is enough for you to be dressed – when the feast begins, I will take you there to attend.” So, after we went round for a little while, He transported me inside my bed.

The garment of light of the risen Humanity of Jesus.

This morning, finding myself outside of myself, for a little while I saw my adorable Jesus in the act of His Resurrection – all clothed with refulgent light, so much so, that the sun remained obscured before that light. I was enchanted, and I said: ‘Lord, if I am not worthy to touch your glorified Humanity, let me at least touch your garments.’ And He told me: “My beloved, what are You saying? After I rose again I had no more need for material garments; rather, my garments are of sun, of most pure light which covers my Humanity, and which will shine eternally, giving unspeakable joy to all the senses of the Blessed. This has been conceded to my Humanity because there was no part of It which was not covered with opprobrium, with pains, with wounds.” Having said this, He disappeared, and I could find neither His Humanity nor His garments; or rather, as I would take His sacred garments Between my hands, they would escape me andI would not be able to find them.

Permanent link to this article: https://luisapiccarreta.com/34-today-is-the-69th-anniversary-of-the-pious-transit-of-the-servant-of-god-luisa-piccarreta-to-heaven/