3/27 A Holy and Blessed Easter in the Divine Will 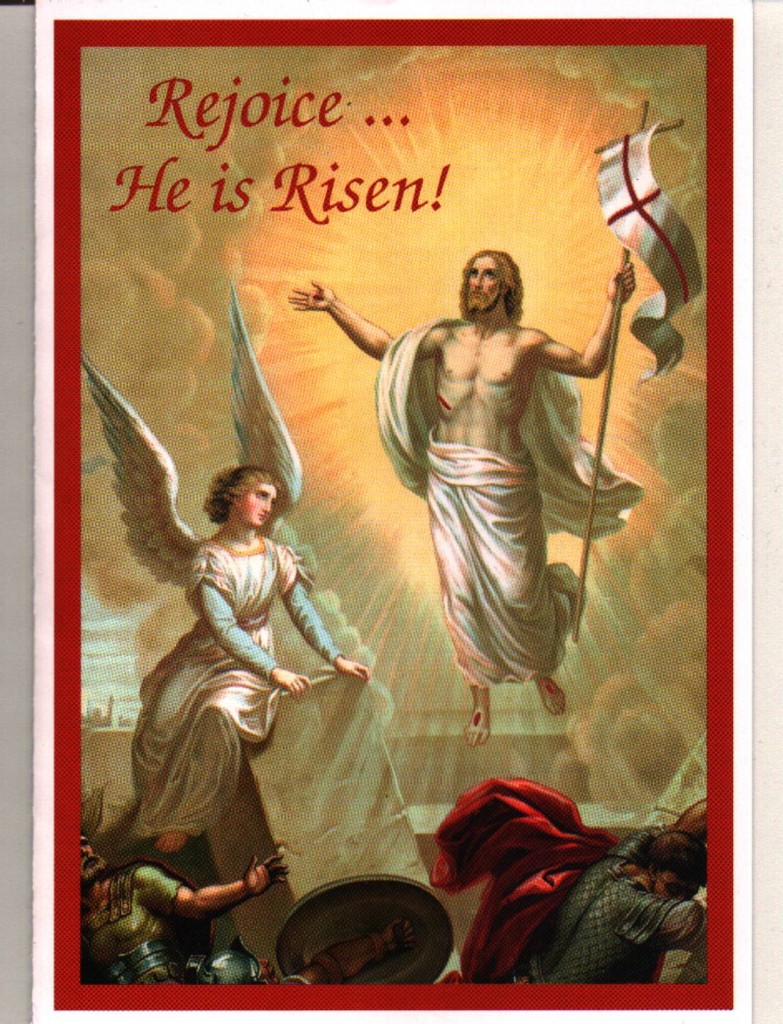 Resurrected Humanity of Jesus, symbol of those who will live in His Will.

Resurrection. Therefore, they will be many; almost like stars, they will form a beautiful ornament to the Heaven of my Humanity. But the Saints of the living in my Will, who will symbolize my Resurrected Humanity, will be few. In fact, many throngs and crowds of people saw my Humanity, but few saw my Resurrected Humanity – only the believers, those who were most disposed, and, I could say, only those who contained the seed of my Will. In fact, if they did not have that seed, they would have lacked the necessary sight to be able to see my Resurrected and glorious Humanity, and therefore be spectators of my ascent into Heaven.

Now, if my Resurrection symbolizes the Saints of the living in my Will – and this with reason, since each act, word, step, etc. done in my Will is a Divine resurrection that the soul receives; it is a mark of glory that she receives; it is to go out of herself in order to enter the Divinity, and to love, work and think, hiding herself in the refulgent Sun of my Volition – what is the wonder, if the soul remains fully risen and identified with the very Sun of my Glory, and symbolizes my Resurrected Humanity? But few are those who dispose themselves to this, because even in sanctity, souls want something for their own good; while the Sanctity of living in my Will has nothing of its own – everything is of God. It takes too much for souls to dispose themselves to this – to strip themselves of their own goods. Therefore, they will not be many.

You (Luisa) are not in the number of the many, but of the few. Therefore, be always attentive to the call, and to your

How, if man had not sinned, Jesus was to come upon earth glorious and with the scepter of command. Man was to be the bearer of his Creator.

… Listen my little newborn of my Divine Will (Luisa): if man had not sinned, if he had not withdrawn from my Divine Will, I would have come upon earth – but do you (Luisa) know how? Full of majesty, as when I rose again from death. Even though I had my Humanity similar to that of man, united to the Eternal Word, how different was my resurrected Humanity – glorified, clothed with light, not subject to either suffering or dying: I was the true Divine Triumpher. On the other hand, before dying, though voluntarily, my Humanity was subject to all pains; even more, I was the Man of Sorrows. And since man had his eyes still dazzled by the human will, and therefore he was still infirm, few were the ones who saw Me resurrected, and this served to confirm my Resurrection. Then I ascended into Heaven, to give man the time to take the remedies and the medicines, so that he might recover and dispose himself to know my Divine Will, in order to live, not of his will, but of Mine, and so I will be able to show Myself full of majesty and of glory in the midst of the children of my Kingdom. Therefore, the Resurrection is the confirmation of the Fiat Voluntas Tua on earth as It is in Heaven. After such a long sorrow, suffered by my Divine Will for many centuries, of not having Its Kingdom upon earth and Its absolute dominion, it was right that my Humanity place Its divine rights in safety, and realize Its original purpose and Mine, of forming Its Kingdom in the midst of creatures.

She sees the Resurrection of Jesus. Jesus speaks about obedience.

As my adorable Jesus continues to deprive me of His presence, I feel a bitterness, and as though a knife were stuck in my heart, which gives me such pain as to make me cry and scream like a child. Ah, truly, I seem to have become like a child who, when his mother departs from him even for just a little, cries and screams so much as to turn the whole house upside down, and there is no other remedy to make him stop crying than for him to see himself in the arms of his mother again.  So I am – a true little girl in virtue, for if it were possible for me I would turn Heaven and earth upside down in order to find my highest and only Good, and only when I find myself in possession of Jesus, then do I calm down.  Poor little girl that I am, I still feel the swaddling clothes of infancy that clasp me; I am unable to walk by myself, I am very weak, I do not have the capacity of the adults, who let themselves be guided by reason.  So here is the highest necessity I have to be with Jesus; right or wrong, I don’t want to hear anything – what I want to hear is that I want Jesus.  I hope that the Lord may want to forgive this poor little girl, who sometimes commits some excesses.

After this, the light withdrew, Jesus disappeared, and I am left with such sorrow, seeing myself without Him again, that I feel as if I had a burning fever that makes me fidget and rave. Ah! Lord, give me the strength to bear with You in these delays, for I feel faint.

The garment of light of the risen Humanity of Jesus.

This morning, finding myself outside of myself, for a little while I saw my adorable Jesus in the act of His Resurrection – all clothed with refulgent light, so much so, that the sun remained obscured before that light. I was enchanted, and I said:  ‘Lord, if I am not worthy to touch your glorified Humanity, let me at least touch your garments.’  And He told me:  “My beloved, what are You saying?  After I rose again I had no more need for material garments; rather, my garments are of sun, of most pure light which covers my Humanity, and which will shine eternally, giving unspeakable joy to all the senses of the Blessed.  This has been conceded to my Humanity because there was no part of It which was not covered with opprobrium, with pains, with wounds.”  Having said this, He disappeared, and I could find neither His Humanity nor His garments; or rather, as I would take His sacred garments between my hands, they would escape me and I would not be able to find them.

The Heaven of Jesus on earth is the souls who give a dwelling to His Divinity.

As I was in my usual state, my adorable Jesus came for just a little and told me: “My daughter (Luisa), when I came upon earth my heaven was my Humanity, and just as in the heavens one can see the multitude of the stars, the sun, the moon, the planets, and vastness, all placed in good order; in the same way, my Humanity, which was my heaven – image of the heavens that exist up above, in which everything is orderly – was to make the order of the Divinity dwelling inside shine forth, that is, virtues, power, grace, wisdom, and the like. Now, when the heaven of my Humanity ascended into Heaven after my Resurrection, my heaven upon earth was to continue to exist – and it is the souls who give a dwelling to my Divinity. Dwelling in them, I form my heaven, and from them also do I make the order of the virtues contained inside shine forth.  What honor for the creature to lend a heaven to her Creator!  But – oh, how many deny it to Me!  And you (Luisa) – would you (Luisa) not want to be my heaven?  Tell Me you (Luisa) would.”  And I:  ‘Lord, I want nothing but to be recognized in your Blood, in your wounds, in your Humanity, in your virtues.  In this alone I would want to be recognized, so as to be your heaven, and to be unrecognized by all.’  He seemed to approve of my proposal, and He disappeared.

The three types of resurrection which suffering contains.

As I continued to be in suffering a little more than usual, on coming, my good Jesus told me: “My daughter (Luisa), suffering contains three types of resurrection.  First, suffering makes the soul rise again to grace.  Second, as suffering advances, it gathers the virtues and the soul rises again to sanctity.  Third, as suffering continues, it perfects the virtues, it embellishes them with splendor, forming a beautiful crown; and the soul, crowned, rises again to glory on earth, and to glory in Heaven.”  Having said this, He disappeared.

Permanent link to this article: https://luisapiccarreta.com/327-happy-easter-2/