The Cross, a way strewn with stars.

3/25 The Annunciation in the Divine Will

3/24 The Feast of the Annunciation is tomorrow

3/24 The Feast of the Annunciation is tomorrow 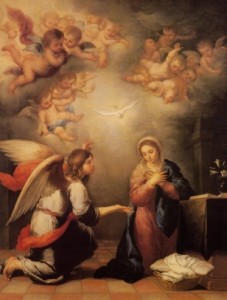 The First Joyful Mystery of the Rosary.  Tomorrow the Church celebrates that day when the Archangel Gabriel requested Our Lady to be the Mother of God.  Mary accepts and declares Herself to be the handmaid of the Lord.

The Annunciation is one of the three most ancient feasts of Our Lady.  The feast probably dates from the Council of Ephesus in 431, when Our Lady was proclaimed the Mother of God.  This proclamation was because of a heresy which denied Mary’s Divine Motherhood.  It was also the Council of Ephesus which added the following words to the Hail Mary:  “Holy Mary Mother of God, pray focus sinners now and at the hour of our death, Amen.”

This feast has been known by many names over the years, including:  the Feast of the Incarnation,” “the beginning of the Redemption,” “the Conception of Christ” and “the Announcing of the Christ.”

Day Nineteen – The Virgin Mary in the Kingdom of the Divine Will.

Now, My daughter, listen to Me: I continued My Life in Nazareth; the Divine Fiat continued to expand Its Kingdom within Me. It used My littlest acts, even the most indifferent ones—such as keeping the little house in order, starting the fire, sweeping, and all the tasks that are usually done in the families—to let Me feel Its Life Palpitating in the fire, in the water, in the food, in the air I breathed— in everything. And Investing them, It formed over my little acts Seas of Light, of Grace, of Sanctity; because wherever It Reigns, the Divine Will has the Power to form, from little trifles, New Heavens of Enchanting Beauty. In fact, being Immense, It does not know how to do small things, but with Its Power It gives Value to trifles, and makes of them the Greatest Things, such as to Astonish Heaven and earth. Everything is Holy, everything is Sacred, for the one who Lives of Divine Will.

Now, daughter of My Heart, pay attention to Me and listen: several days before the descent of the Eternal Word upon earth, I could see Heaven opened and the Sun of the Divine Word at Its doors, as though to look out for the one upon whom He was to take His Flight, to render Himself Celestial Prisoner of a creature. O! How Beautiful it was to see Him at the doors of Heaven, as though on the lookout, and to spy the fortunate creature who was to host Her Creator!

The Sacrosanct Trinity no longer looked at the earth as alien to Them, because there was little Mary who, by possessing the Divine Will, had formed the Divine Kingdom in which He could descend safely, as in His own Dwelling, in which He would find Heaven and the many suns of the many Acts of Divine Will done in My Soul. The Divinity Overflowed with Love, and removing the Mantle of Justice which, for so many centuries, They had kept with creatures, They covered Themselves with the Mantle of Infinite Mercy, and decreed among Themselves the Descent of the Word, and were in the Act of sounding the Hour of the Fulfillment. At this sound, Heaven and earth were Astounded, and all stood at attention, to be spectators of such a Great Excess of Love, and a Prodigy so unheard-of.

Your Mama felt Ignited with Love, and echoing the Love of My Creator, I wanted to form one single Sea of Love, so that the Word might descend upon earth within it. My Prayers were Incessant, and while I was praying in my little room, an Angel came, sent from Heaven as messenger of the Great King. He came before Me, and bowing, he hailed Me: “Hail, O Mary, our Queen; the Divine Fiat has filled You with Grace. He has already pronounced His Fiat— that He wants to descend; He is already behind my shoulders, but He wants Your Fiat to form the Fulfillment of His Fiat.”

At such a great announcement, so much desired by Me— although I had never thought I would be the chosen one—I was stupefied and hesitated one instant. But the Angel of the Lord told Me: “Do not fear, our Queen, for You have found Grace before God. You have Conquered Your Creator; therefore, to complete the Victory—pronounce Your Fiat.”

I pronounced My Fiat, and—O! Marvel—the two Fiats fused together and the Divine Word descended into Me. My Fiat, which was Endowed with same Value as the Divine Fiat, from the Seed of My humanity, formed the tiny little Humanity which was to enclose the Word; and the Great Prodigy of the Incarnation was accomplished.

O! Power of the Supreme Fiat—You raised Me so high as to render Me Powerful, to the point of being able to create within Me that Humanity which was to enclose the Eternal Word, whom Heaven and earth could not contain. The heavens were shaken, and all Creation assumed the attitude of Feast; and exulting with Joy, they peeked over the little house of Nazareth, to give homages and obsequies to the Creator made Man; and in their mute language, they said: “O! Prodigy of prodigies, which only a God could do. Immensity has made itself little, Power has rendered Itself powerless, His Unreachable Height has lowered itself deep into the abyss of the womb of a Virgin, and at the same time, He is little and Immense, Powerful and powerless, Strong and weak.”

My dear daughter, you cannot comprehend what your Mama experienced in the Act of the Incarnation of the Word. All pressed upon Me and awaited My Fiat, I could say, Omnipotent.

Now, dear daughter, listen to Me: how much you should take to heart doing the Divine Will and Living of It. My Power still exists— let Me pronounce My Fiat over your soul. But in order to do this, I want your own. A True Good cannot be done with one alone, but the Greatest Works are always done between two. God Himself did not want to do it on His own, but wanted Me together with Him to form the Great Prodigy of the Incarnation; and in My Fiat and in His, the Life of the Man-God was formed, the destiny of mankind was restored, Heaven was no longer closed; all Goods were enclosed between the two Fiats. Therefore, let us pronounce them together: “Fiat! Fiat!” and My Maternal Love will enclose in you the Life of the Divine Will.

Day Twenty The Virgin Mary in the Kingdom of the Divine Will.

My dear daughter, today I await you more than ever. My Maternal Heart is swollen; I feel the need to pour out My Ardent Love with My daughter: I want to say to you that I am the Mother of Jesus. My Joys are Infinite; Seas of Happiness inundate Me. I can say: I am the Mother of Jesus; His creature, His handmaid, is Mother of Jesus—and I owe this only to the Fiat. It rendered Me Full of Grace, It prepared the Worthy Dwelling for My Creator. Therefore, always Glory, Honor and Thanksgiving be to the Supreme Fiat.

Now listen to Me, daughter of My Heart: as soon as the Little Humanity of Jesus was formed in My Womb by the Power of the Divine Fiat, the Sun of the Eternal Word Incarnated Himself in It. I had My Heaven, formed by the Fiat, all studded with Most Refulgent Stars that glittered with Joys, Beatitudes, Harmonies of Divine Beauty; and the Sun of the Eternal Word, Blazing with Inaccessible Light, came to take His Place within this Heaven, hidden in His Little Humanity. And since His Little Humanity could not contain Him, the Center of this Sun remained in It, but Its Light Overflowed outside, and Investing Heaven and earth, It reached every heart. And with Its Pounding of Light, It knocked at each creature, and with Voices of Penetrating Light, It said to them:

“My children, open to Me; give Me a place in your heart. I have descended from Heaven to earth in order to form My Life in each one of you. My Mother is the Center in which I reside, and all My children will be the circumference, in which I want to form so many of My Lives for as many as are My children.” And the Light knocked and knocked again, without ever ceasing; and the Little Humanity of Jesus moaned, cried, agonized, and within that Light which reached into the hearts, He made flow His Tears, His Moans and His Pangs of Love and of Sorrow.

Now, you must know that a New Life began for your Mama. I was aware of everything that My Son was doing. I saw Him devoured by seas of Flames of Love; each one of His Heartbeats, Breaths and Pains were Seas of Love that He unleashed, enveloping all creatures to make them His own by Force of Love and of Sorrow. In fact, you must know that as His Little Humanity was Conceived, He Conceived all the Pains He was to suffer, up to the last day of His Life. He enclosed all souls within Himself, because, as God, no one could escape Him. His Immensity enclosed all creatures, His All-seeingness made them all present to Him. Therefore, My Jesus, My Son, felt the weight and the burden of all the sins of each creature. And I, your Mama, followed Him in everything, and felt within My Maternal Heart the New Generation of the Pains of My Jesus, and the New Generation of all the souls whom, as Mother, together with Jesus I was to Generate to Grace, to Light, to the New Life which My Dear Son came to bring upon earth.

My daughter, you must know that from the moment I was Conceived, I Loved you as Mother, I felt you in My Heart, I Burned with Love for you, but I did not understand why. The Divine Fiat made me do facts, but kept the Secret hidden from Me. But as He Incarnated Himself, He revealed the Secret to Me, and I comprehended the Fecundity of My Maternity—that I was to be not only Mother of Jesus, but Mother of All; and this Maternity was to be formed on the stake of Sorrow and of Love. My daughter, how much I have Loved you, and I Love you.

Now listen to Me, dear daughter—what extent one can reach when the Divine Will takes Operating Life in the creature, and the human will lets It Work without impeding Its Step. This Fiat, which by Nature Possesses the Generative Virtue, Generates all Goods in the creature; It renders her Fecund, giving her Maternity over all, over all Goods, and over He who created her. Maternity says and means True Love, Heroic Love, Love that is content with dying to give Life to the one It has Generated. If this is not there, the word maternity is sterile, is empty, and is reduced to words, but does not exist with facts. Therefore, if you, My daughter, want the Generation of all Goods, let the Fiat take Operating Life in you, which will give you the Maternity, and you will Love everyone with Love of Mother. And I, your Mama, will teach you how to fecundate in you this Maternity, all Holy and Divine.

Permanent link to this article: https://luisapiccarreta.com/324-the-feast-of-the-annunciation-is-tomorrow/