Love is My perennial “Passion”

The agony of Jesus in the garden of Gethsemane (second part) 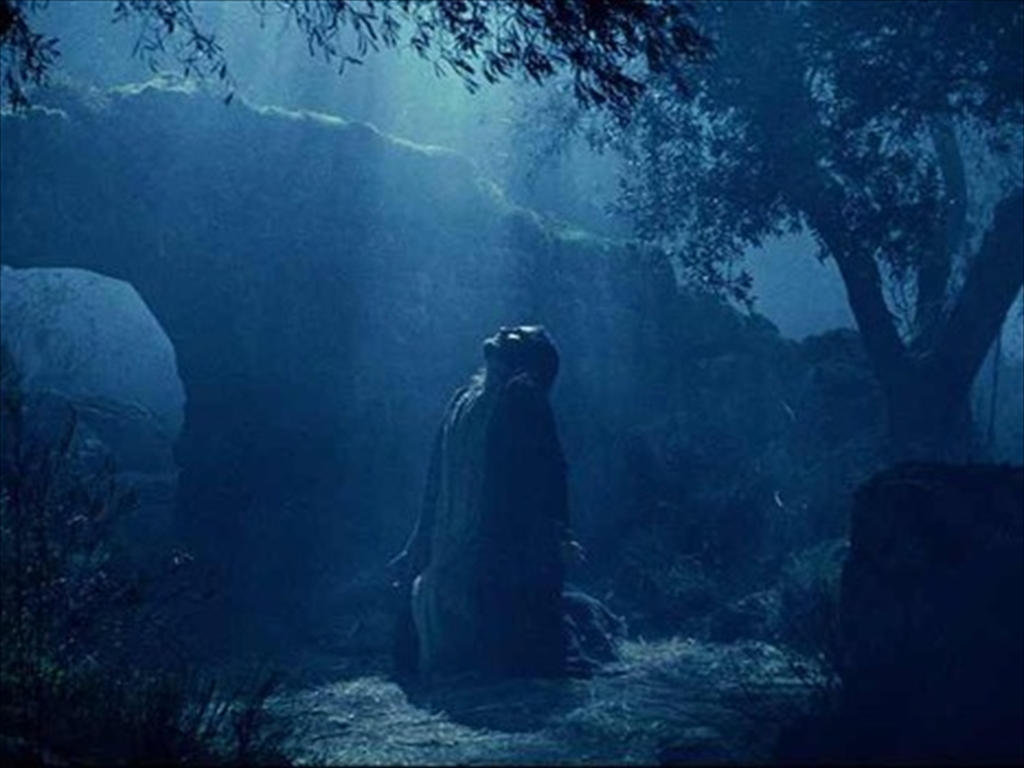 Jesus addressed to the three disciples these words:  “My soul is very sorrowful, even to death”. It isn’t an expression by Jesus, it is a quote from the Psalm 43 in which we can find the drama of the human condition, and in this case, the condition of Jesus. This firm determination “unto death” calls to mind a situation lived by many of those sent by God in the Old Testament and which is expressed in their prayers.

For example Moses was dramatically aware of the trial he was undergoing while guiding the people through the desert and said to God: “I am not able to carry all this people alone, the burden is too heavy for me. If you will deal thus with me, rather kill me at once, kill me if I have found favour in your sight, that I may not see my wretchedness” (cf. Num 11:14-15).

Elijah too found doing his duty to God and to his People difficult. “He himself went a day’s journey into the wilderness, and came and sat under a broom tree; and he asked that he might die, saying, “It is enough; now, O Lord, take away my life; for I am no better than my fathers” (The first Book of Kings 19:4).

What Jesus said to the three disciples whom he wanted near him during his prayer at Gethsemane shows that He felt fear and anguish experiencing his loneliness in the face of his own death. Moreover Jesus’ fear and anguish included all the experiences of men in the face of their own death. He felt the weight of that moment represented by his sadness and anguish and was afraid of not being able to endure it. And He fell on the ground and prayed that, if it were possible, the hour might pass from Him,”

Jesus addressed to the Father, He fell prostrate on the ground and prayed. His face on the ground expressed his obedience to the Will of the Father and before saying that He wanted to accomplish the will of his Father, He expressed his attitude with this gesture of the body. It is the full surrender to God. This gesture is repeated in the ordination of deacons, priests and bishops in order to express their willingness to accomplish the will of God in their own lives. It is an attitude that we must learn to live also in our personal prayer.

Pope Benedict continued his catechesis saying: “In prayer we too should be able to lay before God our labours, the suffering of certain situations, of certain days, the daily commitment to following him, to being Christian, and also the weight of the evil that we see within ourselves and around us, so that he may give us hope and make us feel his closeness and give us a little light on the path of life.”

Jesus teaches us this same attitude in the garden of Gethsemane, that is in the most difficult moment of his life when he was facing his death, He put his life in God’s hands so that He might lead it according to His Will. Jesus might even get angry with God, He might even wonder  the ‘why’ of  everything  that was going on, instead He surrendered completely to God, without hesitation. Even Jesus asked  Himself the questions that we ask ourselves, but He chose, at that time, to put his life in God’s hands.

How did Luisa describe, through what Jesus said to her, this moment of Jesus’ prayer in the Garden? The Hours of the Passion does not want to describe what Jesus experienced outwardly in the Passion, but what He experienced inwardly in dealing with the Passion: all his thoughts, his repairs that He wanted to offer for every human sin in every pain suffered during those hours. Describing the moment of prayer in the Garden of Olives,  Jesus lived the most difficult moment of the entire Passion, and explained the reason.

Love tormented Jesus more than the sufferings of His Passion. It was the Eternal Love, which, wanting primacy in everything, was making Him suffer, all at once and in the most intimate parts, what the executioners would make Him suffer little by little.

Love! Jesus suffered so much at that moment, because He loved! This was the suffering of the Son of God who loved infinitely guilty man who refused this love; a rejection that Jesus felt heavily on himself, it is as if it crushed him. But before this renewed rejection, represented by Judas’ betrayal, Jesus so loved man that He gave his life. The physical sufferings that He endured on the cross were nothing compared to the pain that He felt in his heart when He accepted God’s will, because the Father asked Jesus to love the man despite his refusal.

It was Love which prevailed in everything, over Him and within Him. Love was nail for Him, Love was scourge, Love was crown of thorns – Love was everything for Him. Love was his perennial passion, while that of men was in time.

Jesus invited Luisa to enter into his Heart to be dissolved in his love and to comprehend how much He loved her. It is the same invitation that Jesus makes to us. We have to enter into Jesus to understand how much He loves us, and how much He suffered for love, so that we too can learn to love God just as Jesus loved Him. Only then,  we can get out of this diffidence; only if we begin to love in this way, we can love God even in the most difficult moments, rather than rebel against Him.

In Luisa’s writings there are some passages on this subject that we discussed in the Hours of the Passion where Jesus, speaking of his agony in Gethsemane, highlighted that it was love that led Him to undergo his Passion.

On November 25, 1909 Jesus told Luisa that men did nothing but work the skin of his Humanity, while the eternal Love worked all of his interior. So, in his agony, the eternal Love, the immense Love, the incalculable Love, the hidden Love – not men – opened large wounds in Him, pierced Him with flaming nails, crowned Him with burning thorns, made Him drink boiling gall.

And his Humanity, unable to contain so many different martyrdoms at the same time, poured out large streams of Blood; It writhed, and reached the point of saying: ‘Father, if it be possible, let this chalice pass from Me; yet, not my will, but Yours be done’ – which It did not say in the rest of the Passion.

The real cause of the Passion of Jesus, was not the wickedness of men, but Love. Love like a nail nailed Jesus to the cross, and there Jesus loved each man with divine love, with total love. Only love could keep Jesus on the cross as the Redeemer. On the cross with Jesus there were also two other people, that were not gone up there for love, they swore, But Jesus on the cross made the highest act of love, He saved mankind. He prepared all this inwardly in his agony in the Garden of Olives.

It was love that supported Jesus in his Passion; and it is love that has to support us in our “Passions”, when our life is put seriously to the test. Each of us lives or lived many “Passions”. Sometimes it seems that our life has been very generous with us; sometimes these “Passions” beat, crushed, dehumanized us . And in these moments, we wonder, where is love? How much love do I put in this suffering? What came out of me? Love or anger, hatred, resentment, violence, rebellion? Jesus, in this hour of his Passion, showed me that when He experienced sadness and bitterness for this situation, He felt supported by love that led Him to reach the end of everything.

The second passage, that we consider, is dated January 22, 1913. In it Jesus spoke to Luisa of the three effects of His Passion.

His first Passion was of love, because the first step with which man, in sinning, gives himself to evil is the lack of love; so, since love is missing, He falls into sin. In order to be repaid through Him for the lack of love of the creatures, love made Jesus suffer more than anyone; It almost crushed Him, more than if He were under a press. It gave Him as many deaths for as many creatures receiving life.

The second step that occurs in sin is defrauding God of His glory. So, in order to be repaid for the glory taken away by the creatures, the Father made Him suffer the Passion of sin, such that each sin gave Him a special Passion. Although there was one Passion, He suffered for sin as many Passions as there would be sins committed until the end of the world. So, the glory of the Father was restored.

Each of us is called to meditate on the Passion of the Lord, to contemplate Love, because only Love is able to give meaning to all that we live, we do and we suffer. When we think about love we will always refer it to pleasant, positive, beautiful, charming situations: romantic love,  the love that characterizes the most beautiful situations that make us feel good about ourselves and with others. And even the media pester us with this idea of ​​love  that is sometimes very idealized and mushy. But this is only one side of love that makes it only superficially known to us. But there is also another love that we need to know, which is part of our life and sometimes, suffering and pain, don’t show it to us. It’s love that is able to suffer! And the Passion of Jesus shows us just that kind of love, or rather, this way of loving,  when we suffer, when we are sorrowful, betrayed and persecuted. The suffering of Jesus was driven by love and thanks to this love that His suffering, His Passion have become salvation for every man. When suffering is supported by despair leads man to destruction. It is not God who destroys man, but it is the man who has chosen to destroy himself. God shows us the way of salvation and directs us to live everything, even suffering and trial, in love, because only love is the way that can lead man to salvation.

Permanent link to this article: https://luisapiccarreta.com/315-love-is-my-perennial-passion/