2/7 The More The Soul Strips Herself Of Herself, The More Jesus Clothes Her With Himself 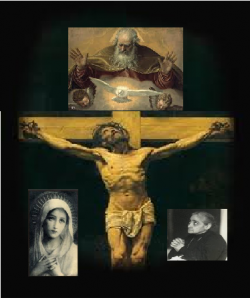 I spent all these days in a sea of bitterness, because blessed Jesus very often deprives me of His lovable presence; and if He makes Himself seen, I see Him in my interior, immersed in a sea whose waves rise above Him in the act of submerging Him.  And in order not to be submerged and suffocated, Jesus moves His arm, rejecting the wave, and looks at me with pitiful eyes, asking for my help, and saying to me:  “My daughter (Luisa), see how sins are so many that they want to submerge Me!  Don’t you (Luisa) see the waves that they send Me, such that, if I did not motion my arm, I would be drowned?  What sad times, which will bring sad consequences.”  And while He is saying this, He hides more within my interior.  What pain, to see Jesus in this state – these are pains which torture the soul and tear it to shreds.  Oh! How one would suffer any martyrdom in order to relieve sweet Jesus.

Then, this morning it seemed to me that my lovable Jesus could not take any more, and making use of His power, He came out from within that sea full of all those weapons, capable of wounding and even of killing, which struck terror to the mere sight.  And leaning His head upon my breast, all afflicted and pale, but beautiful, and of enrapturing beauty, He told me:  “My beloved daughter (Luisa), I could take no more.  If justice wants its course, my love too wants to pour itself out and follow its way.  This is why I have come out of that horrible sea which the sins of creatures form around Me, in order to give field to my love, to come and pour Myself out with the little daughter of my Will (Luisa).  You (Luisa) too could not take any more; in that horrible sea I heard the rattle of your agony because of my privation, and as though putting everyone aside, I have run to you (Luisa) to pour Myself out and to let you (Luisa) pour yourself out in love with Me, so as to give you (Luisa) life again.”  And while saying this, He squeezed me tightly to Himself, kissed me, and placed His hand at my throat, almost to relieve me from the pain that He Himself had given me a few days ago when, as He strongly pulled my nerves at the place of my heart, which correspond to my throat, I remained as though choked.  My Jesus was all love, and wanted me to return to Him the kisses, the caresses, the squeezes that He gave me.

After this, I understood that He wanted me to enter into the immense sea of His Will, to be cheered from the sea of the sins of creatures; and I, clinging to Him more tightly, told Him:  ‘My beloved Good, together with You I want to follow all the acts which Your Humanity did in the Divine Will.  Wherever You reached, I too want to reach, so that in all of Your acts You may find mine as well.  So, just as Your intelligence, in the Supreme Will, went through all the intelligences of creatures in order to give the Celestial Father glory, honor and reparation for each thought of creature in a divine manner, and seal each one of their thoughts with the light and the grace of Your Will, I too want to go through each thought, from the first to the last which will have life in human minds, to repeat what was done by You.  Even more, I want to unite myself with the acts of our Celestial Mama, who never remained behind, but always ran together with You, and with those which your Saints have done.’

At this last word, Jesus looked at me and, all tenderness, told me:  “My daughter (Luisa), in my Eternal Will you (Luisa) will find all my acts, as well as those of my Mama, which enveloped all the acts of creatures, from the first to the last which will exist, as though within a mantle.  This mantle is as though made as two, and one of them rose up to Heaven, in order to give to my Father, with a Divine Will, all that creatures owed Him – love, glory, reparation and satisfaction; while the other remained as defense and help of creatures.  No one else has entered into my Divine Will to do all that my Humanity did.  My Saints have done my Will, but have not entered into It, to do all that my Will does, taking all acts, as though in a twinkling of an eye, from the first to the last man, and becoming actors, spectators and divinizers.  By doing my Will one does not arrive at doing all that my Eternal Volition contains; rather, It descends into the creature as limited, as much as the creature can contain of It.  Only one who enters into It expands and diffuses himself like solar light in the eternal flights of my Volition, and finding my acts and those of my Mama, he places his own.  Look inside my Will:  are there perhaps other acts of creature multiplied within mine, reaching up to the last act which is to be performed on this earth?  Look well – you (Luisa) will find none.  This means that no one has entered.  It had been reserved that the doors of my Eternal Volition would only be opened to my little daughter (Luisa), so as to unify her acts with mine and with those of my Mama, and render all our acts triple, before the Supreme Majesty and for the good of creatures.  Now, since I have opened the doors, others may enter, provided that they dispose themselves for such a great good.”

Then I continued to go around in His Will together with Jesus, to do what was done by Him.  Then we looked at the earth together:  how many horrible things could be seen, and how the preparations for the war continued, such as to be horrifying.  All trembling, I found myself inside myself.  Then, after a little while, He came back and continued to speak about His Most Holy Will, saying to me:  “My daughter (Luisa), my Will in Heaven contained the Father, the Son and the Holy Spirit.  One was the Will of the Three Divine Persons; even though They were distinct among Themselves, Their Will was one, and being the only Will acting within Us, It formed all Our happiness, and Our equality in love, in power, in beauty, etc.  But if instead of one Will there were three Wills, We could not be happy, and even less could We make others happy.  We would have been unequal in power, in wisdom, in sanctity, etc.  So, Our one Will, acting within Us, is all Our good, from which so many seas of happiness are released, that no one can penetrate down to the bottom.  Now, in seeing the great good of acting alone in Three distinct Persons, Our Will wants to act alone in three distinct persons on earth; and these are:  the Mother, the Son, the Spouse.  Through them It wants to release more seas of happiness which will bring immense goods to all the pilgrim souls.”

All amazed, I said:  ‘My Love, who will be this fortunate Mother, this Son and this Spouse, which will conceal the Trinity on earth, and in whom your Will will be one?’  And Jesus:  “What! Have you (Luisa) not understood?  Two of them are already at their place of honor:  my Divine Mama and I, the Eternal Word, Son of the Celestial Father, and Son of the Celestial Mother since, by incarnating Myself in Her womb, I became Her own Son.  The Spouse is the little daughter of my Will (Luisa).  I am in the middle, my Mama is at my right, and the Spouse Luisa) at my left.  As my Will acts in Me, It echoes to the right and to the left, and forms one single Will.  This is why I have poured so many graces in you (Luisa), I opened the doors of my Will, I revealed to you (Luisa) the secrets, the prodigies which my Will contains:  to open many ways, so that you (Luisa) might be reached by the echo of my Will, and, losing your own, you (Luisa) might live with my Will alone.  Aren’t you (Luisa) happy?”

Permanent link to this article: https://luisapiccarreta.com/28-the-divine-will-wants-to-act-alone-in-three-distinct-persons-on-earth/