2/2 FEAST OF THE PRESENTATION OF THE LORD

This Wednesday is Ash Wednesday: Suggested Reading for Lent: The Hours of the Passion of Our Lord Jesus Christ

2/11 Feast Day of Our Lady of Lourdes

Feast of Our Lady of Lourdes: The Story of the Miraculous Healing of Sr. Jeanne Fretel, OSB 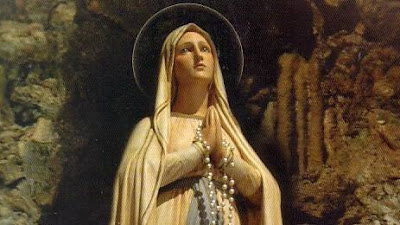 This feast commemorates the first of eighteen apparitions of the Blessed Virgin Mary witnessed by St. Bernadette Soubirous. On February 11, 1858, Bernadette a poor, sickly child of a local peasant family, first glimpsed, “something white in the shape of a girl” in a grotto near Lourdes, France. Later questioned by Church officials, Bernadette stated that she saw, “a pretty young girl with a rosary over her arm.” The girl, Bernadette said, was “lovelier than I have ever seen.” Perhaps because of her lowly background, Bernadette was deeply impressed by the polite and dignified way the Lady treated her. On March 25, 1858, during her sixteenth appearance, the Lady identified herself as “the Immaculate Conception,” a dogma solemnly proclaimed by Pope Pius IX, on December 8, 1854, in Ineffabilis Deus.

Fourteen-year-old Bernadette Soubrious was collecting firewood together with her two younger sisters near the small market town of Lourdes. At some point, Bernadette became separated from her siblings and come upon a rock grotto next to the river. Here the future saint first saw the apparition of the Blessed Virgin, Our Lady of Lourdes, dressed in white with a blue sash and a yellow rose on each foot. Our Lady made the sign of the cross in silence before disappearing.

Bernadette would return to the grotto a second time, but it was during Mary’s third appearance that she addressed Bernadette, asking her to come to the grotto daily for two weeks. Bernadette agreed, and news of the apparitions quickly spread. On another occasion, Our Lady instructed Bernadette to tell the ecclesiastical authorities to build a church at the grotto and to hold processions.

Our Lady also told Bernadette to drink and wash in a spring hidden under the sand. At Mary’s prompting, the young seer began to dig the muddy ground revealing a spring whose water, the Blessed Virgin assured, offered miraculous curative powers and divine healing. Today, this water is credited in the spiritual and physical restoration of innumerable souls. Since the springs discovery over 200 million people have pilgrimaged to Lourdes for healing. A basilica was soon constructed over the Gave de Pau River. The Church has officially documented some seventy miraculous cures at Lourdes, including that of Sr. Jeanne Fretel.

The Miraculous Healing of Sr. Jeanne Fretel
In 1937, Jeanne Fretel was a vivacious. healthy twenty-three-year-old women, before contracting an unknown illness and becoming gravely ill. Her stomach was painful to the touch and she had stared to bleed from her nose, mouth, and intestines. Over eleven years, she would undergo thirteen operations, but her symptoms continued to persist. Later, she was given the diagnoses tubercular peritonitis with no cure in sight. Jeanne was administered Last Rites four times.
At the urging of friends, she traveled to Lourdes in October of 1948. Upon her arrival, she had been nearly comatose for twelve weeks and on the verge of death. Due to her condition, Jeanne was led immediately to Mass. Father Roques, one of the priest celebrants, attempted to give her communion. With the aid of her friend, they placed a sliver of the Blessed Sacrament in her mouth. Seconds later, Jeanne woke from her stupor, opening her eyes for the first time in months.
She was moved to the very grotto where St. Bernadette had her vision. One night, she felt a presence bring her up from the ground. The presence had her place her hands on her stomach. She felt that she was immediately cured of her illness. The next day, she stood and was taken to be bathed in Lourdes’ waters.
When doctors came to examine her, virtually every symptom of her illness had subsided. She returned to her home in November of 1948. In 1950, she took vows to become a Benedictine sister. Following her cure, she showed no signs of the illness, and her miraculous recovery has been official recognized by the Church. Sr. Fretel continued to go to Lourdes to help the sick in need of healing.
Grant us, O merciful Father, protection in our weakness, that we, who keep the Memorial of the Immaculate Mother of God, may by her holy intercession, rise up from our iniquities. Through our Lord Jesus Christ, your Son, who lives and reigns with you, and in the unity of the Holy Spirit, one God, forever and ever. Amen.

Posted by Matthew Coffin at 3:42 PM

Permanent link to this article: https://luisapiccarreta.com/2-11-feast-of-our-lady-of-lourdes/