1/6 Feast of the Epiphany of the Lord 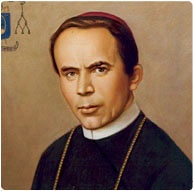 John Neumann was born on March 28, 1811, in Prachatitz, Bohemia. He completed his studies for the priesthood at the University of Prague. At first, his ordination was delayed because of his illness but then put off indefinitely because the diocese had enough priests at that time. Therefore, John, who had always been interested in being a missionary to America, wrote to several bishops in the United States. In 1836, he came to this country uncertain as to where he would go.

Bishop Dubois of New York welcomed him gladly for there were few priests in the area. On June 25, 1836, John was ordained a priest at the old St. Patrick’s Cathedral on Mott Street, New York City. The following week Father Neumann became pastor of the whole Niagara frontier, some 100 miles of swampy, primeval forest. He would walk or ride miles through dangerous forests in snow, rain or heat to bring the consolations of religion to the sick and dying. He neither ate, rested, nor slept properly. He was small in stature, five foot four inches, but sturdy.

Father John Neumann had a deep respect and love for learning. Whenever he could, he set up little schoolhouses and if teachers were not available he found time to conduct the classes himself. After four years of the frontier, the pressure of the work and complete disregard for his own physical welfare, Father Neumann collapsed from exhaustion. He was unable to work for three months and during this time he made the decision to join the Redemptorists. After a one and a half year novitiate, Father Neumann made his profession of vows in 1842. He was the first Redemptorist to be professed in the United States and his first assignment was to the Redemptorist Church of St. James in Baltimore. His ability to speak seven languages, German, Czech, English, French, Italian, Spanish and Gaelic helped him to serve his people. Father Neumann was always there whenever anyone needed him, he never turned anyone away. On February 10, 1848, he became a naturalized citizen of the United States and in January, 1851, Father Neumann was appointed rector of St. Alphonus Church in Baltimore.

It was Pope Pius IX who appointed John Neumann a Bishop and on his forty-first birthday he was consecrated Bishop of Philadelphia by Archbishop Francis Kenrick. His first concern was always the immigrant children. He gave first priority to establishing schools and is credited with setting up the first system of parochial schools in the United States with a unified system under a diocesan board. After increasing the number of parish school children from 500 to 9000 in thirty months, he turned to the task of church building and recruiting priests. During his eight year reign as Bishop, 73 new church and chapels were built.

Bishop Neumann founded the first Italian Catholic parish in the United States. At a time when there was no priest who spoke their language, Bishop Neumann gathered them together in his private chapel and preached to them in their native language. In 1853 he purchased a church building in South Philadelphia and dedicated it to St. Mary Magdalene de Pazzi.

Inspired by his love of Christ in the Blessed Sacrament, Bishop Neumann established the first diocesan program of Forty Hours Devotion. In this way the people had a special time to pray before the Blessed Sacrament. Always wanting to help his people, Bishop Neumann wrote two catechisms, a Bible history and a handbook for the clergy. The catechisms were written in German for the instruction of the German speaking immigrants. He lived the command of the Lord Jesus “Go and teach all nations.” The United States grew in faith and love through his life and teachings.

From his earliest years in the priesthood, John Neumann recognized the contribution of religious women to the Church. He labored with care and concern to foster and encourage various female religious orders. After his visit to Rome in 1854, on the advice of Pope Pius IX, Bishop Neumann founded a religious order for women, the Third Order of St. Francis of Glen Riddle.

On the morning of January 5, 1860, Bishop Neumann was not feeling well. He had not been feeling well for several days. But mindful of his lifelong habit of never wasting a minute, he planned to take a walk and do a few errands. On that day he had lunch with Bishop Wood and after lunch he confided to a Redemptorist conferee, Father Urban, “I have a strange feeling today. I feel as I never felt before. I have to go out on a little business and the fresh air will do me good. A man must always be ready,” Bishop Neumann said, “for death comes when and where God wills it.” As he walked along Vine Street near Thirteenth, his steps became uncertain and he was seen to stagger. A moment later he fell to the ground. Two strangers carried him into a home at 1218 Vine Street and there in a matter of minutes he died of apoplexy in his forty-ninth year.

John Berger, the bishop’s nephew, wrote, “He hated all honor and praise of the world.” At his funeral “The Little Bishop” had no choice. Honor and praise were showered upon him from all sides, from the rich and the poor, from the little children and the aged. In a moving oration at the requiem mass, Archbishop Kendrick told the congregation:
“You will testify to his blameless life and unfeigned piety. The constant visitation to his diocese throughout almost the whole year marked him as the good shepherd anxious to afford his sheep the pastures of eternal life . . . Truly he has been an active and devoted prelate, living only for his flock.”

Bishop Neumann was laid to rest in the Redemptorist Church of St. Peter at Fifth Street and Girard Avenue, Philadelphia. Church officials placed Bishop Neumann’s earthly remains under the main altar clothed in the vestments of his episcopal office and encased in a wax cover.

This (in the usual course of events) would have been the end of Bishop Neumann’s story. But, in his case, the course of events did not follow the usual pattern. Out of their deep love for “The Little Bishop” the people began to make it a habit to pray at his tomb. The thing that made this unusual was that the people prayed not for him, but to him. The people, especially the poor, who had been helped by his charity and kindness began to petition him for favors, for recovery from illness, for help with their many problems. As time went by, stories were heard and repeated of the marvelous things that had come to pass after prayers had been invoked to Bishop Neumann. The Church at this time didn’t sponsor the devotion to Bishop Neumann. In 1885, 25 years after his death, application was made to Rome for the introduction of the cause of his beatification. Ten years later, Pope Leo XIII accorded to Bishop Neumann the title of Venerable and in 1921 Pope Benedict XV declared that Bishop Neumann was “heroic in virtue.” As the long slow process toward Bishop Neumann’s beatification continued, two miracles which resulted from prayer to “The Little Bishop” were approved by the Church.

In May 1923, in the town of Sassuolo, near Milan in northern Italy, an eleven-year-old girl named Eva Benassi was suffering from headaches, abdominal pains and fever. Her doctor diagnosed the case as tubercular peritonitis. Eva’s condition grew steadily worse. One day the doctor told the girl’s family that death was imminent and could be expected that night. A nun at Eva’s school organized prayer to Bishop Neumann for healing and touched her swollen abdomen with a picture of the bishop. That night the disease disappeared.

On July 8, 1949, J. Kent Lenahan Jr. of Villanova, Pa., a music teacher and bandleader was critically injured in an automobile accident. His skull was crushed, one eye was almost torn from its socket, and he was bleeding from the ears, nose and mouth. At the hospital, he lingered for four days between life and death. His condition was regarded as hopeless. He had a 107-degree temperature and his pulse was rapid. His mother obtained a portion of Bishop Neumann’s cassock and laid it on her son. His temperature dropped to 100 degrees and his pulse was almost normal in a matter of hours. Within a few days his injuries were well on the way to complete healing and five weeks later he left the hospital in excellent health.

These two cures played a major part toward Bishop Neumann’s beatification. On October 13, 1963 Pope Paul VI listed Bishop Neumann among the heavenly Blessed. One further healing was needed for sainthood.

In 1963, when he was six, doctors gave Michael P. Flanigan of West Philadelphia, Pa., six months to live. He had an incurable case of Ewing’s sarcoma, a bone cancer of legs, jaw and lungs. Several times his parents carried him to the Neumann Shrine at St. Peter’s. His mother pinned a relic of Bishop Neumann to his pajamas. Six months after the diagnosis was made there were no signs of the disease.

Each servant of God is created as an individual; each has his own individual type of holiness. His was what we may call the ordinary way of holiness, a way practical for all. He was not, during life, the recipient of extraordinary favors; such as the gift of working miracles, of prophecy, of heavenly visions. He merely did the ordinary tasks of every day life extraordinarily well. If there is one word that describes his type of life, it is the word: ‘unworldliness.’ In the midst of much activity, he was not deceived by the bewitching of vanity, obscuring the better things.

The best way to summarize Bishop Neumann’s devotion to duty would be to say that he exemplified the virtues of humility, simplicity, and zeal.

His feast day is January 5.

Permanent link to this article: https://luisapiccarreta.com/15-feast-day-of-st-john-neumann/