12/7 Eve of the Feast of the Immaculate Conception 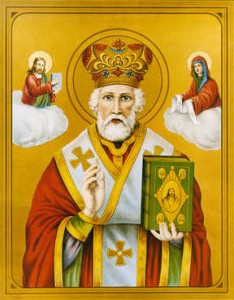 When the Saracens invaded Myra (part of modern day Turkey) the relics of St. Nicholas were moved to Bari in Italy. The Archbishop for Corato has jurisdiction over the provinces of Trani, Bari, and Bisceglie. The Servant of God Luisa Piccarreta, the Little Daughter of the Divine Will, was born and lived her whole life in Corato, the province of Bari.

The Archbishop of Trani also has  the title of Bishop of Nazareth, because when Palestine was lost in 1190 the title of that see was transferred to Barletta (the ancient Barduli), a seaport on the Adriatic, a little south of Trani, to which diocese it then belonged.

The Servant of God, Luisa Piccarreta

the Little Daughter of the Divine Will:

The Call of the Creature to the Order, the Place and the Purpose
for which He was Created by God
Volume 6 – December 6, 1904

As I continued struggling, blessed Jesus came for just a little, and I saw myself as naked, stripped of everything – perhaps a soul more miserable than I am cannot be found, so extreme is my misery.  What a dismal change!  If the Lord does not make a new miracle of His omnipotence to make me rise again from this state, I will certainly die of misery.

Then blessed Jesus told me:  “My daughter, courage, the beginning of Eternal Beatitude is to lose every taste of one’s own.  In fact, as the soul keeps losing her own tastes, the Divine Tastes take possession of her, and the soul, having undone and lost herself, no longer recognizes herself; she finds nothing else of her own – not even spiritual things.  Seeing that the soul has nothing else of her own, God fills her with all of Himself and replenishes her with all the Divine Happinesses.  Only then can the soul truly be called blessed, because as long as she had something of her own, she could not be exempt from bitternesses and fears, nor could God communicate His Happiness to her.  No soul that enters the port of Eternal Beatitude can be exempted from this point – painful, yes, but necessary; nor can she do without it.  Generally they do it at the point of death, and Purgatory does the last job; this is why, if creatures are asked what God’s taste is, what Divine Beatitude means, these are things unknown to them and they are unable to articulate a word.  But with the souls who are My beloved, since they have given themselves completely to Me, I do not want their Beatitude to have beginning up there in Heaven, but to have beginning down here on earth. I (Jesus) want to fill them (souls who have given themselves completely to Our Lord Jesus Christ) not only with the Happiness, with the Glory of Heaven, but I want to fill them with the goods, with the sufferings, with the virtues that My Humanity had upon earth; therefore I strip them, not only of material tastes, which the soul considers as dung, but also of spiritual tastes, in order to fill them completely with My Goods and give them the beginning of True Beatitude.”

Permanent link to this article: https://luisapiccarreta.com/126-today-is-the-feast-day-of-st-nicholas/