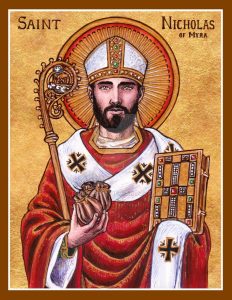 As Bishop of Myra, Nicholas lived the qualities that caused his fame and popularity to spread throughout the Christian world. His vigorous actions on behalf of his people and in defense of the Christian faith reveal a man who lived his convictions. Nicholas was not timid—he did what was necessary and was not easily intimidated by others’ power and position. His concern for the welfare of his flock and his stand for orthodox belief earned him respect as a model for bishops and a defender of the faith.

The people of Myra begged Bishop Nicholas to ask the emperor for relief from the high taxes which were causing much hardship. Nicholas went to plead their cause with Constantine. The emperor granted a large reduction, giving Nicholas a copy of the order. The bishop immediately put the document on a stick and threw it into the sea. Soon afterwards it was found and taken to the authorities in Myra. The order was immediately put into effect, substantially lowering the taxes. Meanwhile Constantine, whose finance ministers had convinced him that this lost revenue would seriously harm the royal treasury, summoned Nicholas to return the document for revision. Nicholas reported that the order was already in effect in Myra. Doubting this, Constantine sent a runner to determine the truth. When Nicholas’ words were confirmed the emperor allowed the reduction to stand. A century later Myra still enjoyed low taxation which the people attributed to St. Nicholas.

Details of Nicholas’ death are not known, but early reference is made to the manna of St. Nicholas, a liquid that formed in his tomb and was renowned for its healing properties. For 750 years St. Nicholas’ tomb in Myra was an ever-increasingly popular pilgrimage site as reverence for the saint grew and spread throughout the Christian world.

As a bishop, Nicholas, servant of God, was first and foremost a shepherd of the people, caring for their needs. His active pursuit of justice for his people was demonstrated when he secured grain in time of famine, saved the lives of three men wrongly condemned, and secured lower taxes for Myra. He taught the Gospel simply, so ordinary people understood, and he lived out his faith and devotion to God in helping the poor and all in need.

Devotion and Use of the Manna of Saint Nicholas

The evening of the 9th of May, the Feast of the Translation of S. Nicholas from Myra-Turkey to Bari-Italy in 1087, the stone sarcophagus is opened. In the crowded crypt, the Archbishop of Bari extracts one or two glasses of water formed during the year around the Saint’s bones. It is the so-called manna, that the Greeks call myron and the Russians myro. A Father of the Dominican Community pours this manna into large containers of blessed water, making a large quantity to fill small bottles in order to satisfy the requests of sick people and pilgrims. Sometimes the Rector gives extremely small bottles of pure manna as relics, but only after official requests of the Orthodox or Catholic Hierarchy.
— Fr. Gerardo Cioffari, director,
Centro Studi Nicolaiani, Basilica San Nicola, Bari, Italy

The “manna of Saint Nicholas” which was once commonly called ‘oil’ is actually transparent pure water that is formed in the tomb of the Saint in the crypt of the Basilica in Bari.

This phenomenon is not easily explainable. It is absolutely excluded that there is some kind of infiltration of water from the outside for it has been proven that the casket containing the bones of the Saint is impermeable.

Notwithstanding the various solutions that are arrived at from numerous hypothesis forwarded, whether supernatural or natural explanations of the phenomenon, the manna is an authentic relic, because it is a liquid that remained in contact with the bones of the Saint, and therefore explains the very reason why there is such a great devotion springing up from this relic.

The manna also exuded in the tomb of the Basilica of Myra immediately after the death of Saint Nicholas, as attested to by numerous biographies and eulogies, all are in accord of the exemplary virtue of the miracle worker. The Legends of the translation likewise affirm that the urn containing the remains of Saint Nicholas of Myra was full of “manna”. After the translation to Bari the phenomenon continued uninterruptedly. It is also fully proven that the pilgrims coming to Bari, are attracted to the tomb of the Saint in view of the fact that the “manna” is famous because of the miracles St. Nicholas accomplishes through it.

Between 1954 and 1957, the authenticity that this liquid truly came from the bones of the Saint, as was commonly held, was put into question. In 1954, because of the renovation being done in the crypt, the tomb was opened and the bones were exhumed. Then they were placed inside an urn, where it remained exposed to the public to see and venerate for three years in the hall of the treasures (of the Saint in the Basilica). Sometimes it was observed that the bones “perspired” a certain kind of fluid; one time the linen sheet which held the relics was found to be soaking wet when the mortal remains of St. Nicholas were re-interred in the tomb. This linen cloth has been preserved up to this day.

From 1980 onwards the manna is formally extracted every May 9, the Feast of the Translation (of the relics from Myra to Bari), by the Rector of the Basilica, in the presence of the delegate of the Pope, the Archbishop of Bari, an Orthodox Bishop, Civil Authorities, the Clergy and Faithful, after the solemn celebration of the Eucharist. The Bishop gives the blessing and after him the Orthodox Bishop too, to the excited assembly of the faithful, with the crystal vial containing the freshly extracted precious liquid, artistically handpainted and is called “glass of St. Nicholas.” The annual output of pure “santa manna” is no more than about 50 ml.

The devotees from time immemorial have always recoursed to the Protector Saint to ask for health in mind and body, by using the “manna”. The liquid distributed to the faithful is holy water in which the “pure santa manna” was mixed. This liquid, conserved in ampules, are taken in as a drink or sprinkled in the part of the body that is suffering from an illness. The Baresian families, from an ancient tradition, kept them as a relic in big bottles designed by local artists depicting episodes from the life, miracles and protection of the Saint. These bottles are very precious whether in the area of religious devotion or cultural-artistic heritage.

The pious use of the manna is a source of hope and health for those who trustingly abandon themselves to God and true devotion to the Saint of Myra, beseeching his intercession and special protection. Recourse to the virtues of the miracle worker of this liquid leaves in anyway a sign that strengthens the Christian faith and the witness of good works.

The relics of Saints (and the manna is a unique relic of St. Nicholas), like the Sacraments, are spiritual helps for us believers to enliven our faith and to sustain us in the midst of our human weakness.
Translated from the Italian by Fr. Winston Fernandez-Cabading, OP
—from the Centro Studi Nicolaiani di Bari, used by permission

Permanent link to this article: https://luisapiccarreta.com/126-st-nicholas-bishop-of-myra/