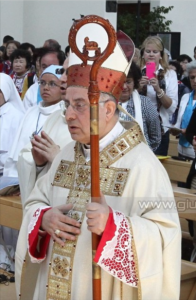 January 26, our Archbishop Giovan Battista Pichierri will celebrates the 25th anniversary of his Episcopal ordination.

The Association “Luisa Piccarreta –  Little Children of the Divine Will”, on the occasion of this anniversary, wants to express with all of you, dear friends, who follow us on this website, best wishes to His Excellency, thanking him for his Episcopal ministry bestowed upon the Diocese of Trani-Barletta- Bisceglie, Titular of Nazareth, especially for his dedication during these years to the cause of Beatification of Luisa.

The Association sees in Mons. Pichierri its own father in faith who accompanies and stimulates it continuously, so that, first of all, it can live and testify of the gift of living in the Divine Will.

His numerous visits to the Association and his ongoing commitment to promote the cause of  beatification and canonization are a sign of his bond with the figure of Luisa, daughter of this land of Puglia who the Lord has chosen as a humble instrument to make known the Gift of Living in the Divine Will throughout the world.

Let us not forget that it was Mons. Pichierri who on October 29, 2005, in the presence of thousands of people from around the world, closed the diocesan inquiry into the life, virtue and reputation of Sanctity of the Servant of God Luisa Piccarreta.

Mons. Giovan Battista Pichierri was born in Sava  (province of Taranto) on February 12, 1943.

After concluding his studies at the diocesan seminary and then at the regional seminary in Molfetta, he was ordained a priest of the Diocese of Oria (Brindisi province) on August 30, 1967.

He completed his theological education by attending the Ecumenical Faculty of Bari, where in 1970 he obtained his license in Ecumenical Theology.

He put the first ten years of his priestly ministry at the service of the regional and diocesan minor seminaries for the High School in Taranto.

Here, he served at first as educator and then as rector.

After returning to the diocese in 1977, he served the diocesan Church working directly with Bishops De Giorgi (now Cardinal and Archbishop Emeritus of Palermo) and Franco and in the range of the sequence between them as “Delegate ad omnia” of Apostolic Administrator Voto, Bishop of Castellaneta.

Since 1982, he was appointed Archpriest by Mons. Armando Franco, and was entrusted with the pastoral care of the parish of SS. Trinity in Manduria, where he carried out his service until March12 1991.

In 1986,  Mons. Franco himself called him to collaborate more directly in the guide of diocese entrusting him with the role of Vicar General and Moderator of the Curia, in addition to that of pastor.

Throughout the years of his ministry he taught Catholic religion in public primary and lower secondary school, in the Lyceum and commercial and technical institutes.

On December 21, 1990 the Holy Father John Paul II  appointed him Bishop of the diocese of Cerignola-Ascoli Satriano (Foggia Province).

On January 26,  1991 he was ordained Bishop in the Cathedral Church of Manduria by the Bishop of the diocese, Mons. Armando Franco.

On November 13, 1999 the Holy Father John Paul II transferred him to the Archdiocese of Trani-Barletta-Bisceglie.

He was installed in it on Jan. 26, 2000, on the ninth anniversary of this Episcopal ordination.

We are grateful to the Lord because the ministry of our Archbishop has been “to testify to the gospel of God’s grace”, as the Acts of the Apostles – Chapter 20, 24 – remind us. Just as his predecessors did consistently with Luisa at first and then with the Association, he has kept the seal of the ecclesial spirit on this small seed destined to bear the fruit of the Kingdom.

Permanent link to this article: https://luisapiccarreta.com/126-25th-anniversary-of-episcopal-ordination-mons-giovan-battista-pichierri-to-testify-to-the-gospel-of-gods-grace/