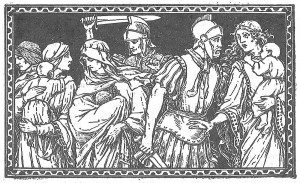 In the second chapter of the Book of Matthew is recorded the story of the Massacre of the Holy Innocents, an event which recalls the Pharaoh’s instructions to midwives during the time Israel was enslaved in Egypt:

And the king of Egypt spoke to the midwives of the Hebrews: of whom one was called Sephora, the other Phua,

Commanding them: When you shall do the office of midwives to the Hebrew women, and the time of delivery is come: if it be a man child, kill it: if a woman, keep it alive……Pharo therefore charged all his people, saying: Whatsoever shall be born of the male sex, ye shall cast into the river: whatsoever of the female, ye shall save alive.

Moses was saved from this murder when his mother placed him in a little ark and floated him in the river. Moses’s sister watched from afar as the Pharaoh’s daughter found the child (Exodus 2). The massacre from which Moses was spared is a type, a foreshadowing, of the massacre of the holy innocents that took place soon after Christ was born.

As to the slaughter of the Innocents in the New Testament, first some background: Herod the Great, the Governor of  Galilee, was an Idumean Jew whom History describes as an extremely cruel man: he was a man who killed several of his wives and his own sons when he suspected they were plotting against him. Challenges to his power were met with a swift and final response, and he even tried to ensure that his cruel campaigns survived him when he arranged that on the day he went on to his eternal reward, hundreds of men in the area would be killed so that there would be mourning at his funeral.

Though this arrangement was never carried out, it speaks well of Herod’s nature.

And during this tyrant’s reign, the Magi — whose adoration of Baby Jesus is rememberd on the Epiphany (6 January) and its Eve (Twelfthnight) — saw the Star of Bethlehem and went to Jerusalem, asking where the new King of Jews may be found. Herod heard of their asking around about the newborn King and, calling the high priests to find out about this this Child, was informed that it was prophecied that the Child would be born in Juda.

Threatened by this prophecy, he sent for the Magi to find the Child and report back so he could go and “worship,” too. The Magi found Jesus but, knowing Herod’s heart after having it revealed to them in a dream, didn’t go back to tell Herod of His wherabouts. Meanwhile, the Holy Family, warned through St. Joseph who was visted by an angel in a dream, makes their flight into Egypt. Herod became enraged at the Wise Men’s “betrayal,” and killed all the baby boys in Bethlehem who were two years old and younger.

The fourth day of Christmas commemorates these baby boys, who are considered martyrs — the very first martyrs (St. Stephen, whose Feast was commemorated 2 days ago, was the first martyr of the Church Age). As Bethlehem was a small town, the number of these Holy Innocents was probably no more than 25, but they are glorious martyrs who died not only for Christ, but in His place. Vestments will be red or purple in mourning, and the Alleluia and Gloria will be supressed at Mass.

Permanent link to this article: https://luisapiccarreta.com/1228-feast-of-the-holy-innocents/