12/1 Novena of Holy Christmas- The Nine Excesses of Love

December 2: Feast of Our Lady of Didinia, Cappadocia, Turkey 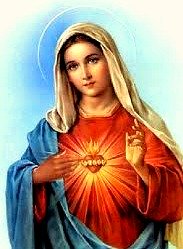 The Abbot Orsini wrote: “Our Lady of Didinia is in Cappadocia. It was before this shrine that Saint Basil had begged the Blessed Virgin to remedy the disorders caused by Julian the Apostate. The Saint was granted a vision from Mary, which foretold the death of the emperor.”

The godless Emperor Julian threatened the city of Caesarea with destruction because of a grudge he bore. Saint Basil gathered the frightened inhabitants on Mount Didinia, where there was an ancient Marian church. After three days of prayer and fasting, Basil had a vision in which he saw Mary surrounded by celestial soldiery and heard her say: “Go call Mercury to me. He shall kill the blasphemer of my Son.”

(Saint Mercurius (Mercury) was a saint/martyr who died in the year 250. He was a powerful man physically, but also courageous. According to tradition, he was once facing a much superior army of Berbers when St. Michael the Archangel appeared to him. St. Michael gave Mercurius a sword shortly before the battle, telling him:

“Mercurius, servant of Jesus Christ, don’t be afraid. Take this sword from my hand and fight the Berbers with it. Don’t forget your God when you come back victoriously. I am Michael the Archangel, whom God sent to inform you that you should suffer for the Lord’s name. I shall be with you and support you until you complete your testimony. The name of Our Lord Jesus Christ will be glorified in you.”

Mercurius felt a strength and confidence granted to him from the sword of Saint Michael, and was invincible in the combat. Not soon afterward, however, he refused to burn incense before the false idols in thanksgiving for the victory, and was subsequently tortured and killed for his faith in the true God.)

After the vision of the Mother of God, both Saint Basil and Libanius went to the Church of Saint Mercury. Upon their arrival they found that the arms of Saint Mercurius, which were usually hung there on display, were now missing. Remembering the words of the Blessed Virgin, they then went back to Mount Didinia rejoicing, and spread the news of the death of the tyrant to the inhabitants.

When the faithful went back to the city and the Church of Saint Mercurius, they found the lance of Mercury back in its accustomed place, although now it was wet with blood.

The Emperor Julian had gone on campaign in Persia, but was forced to retreat from the region. It was later learned that he had died in that foreign land on that same night that Saint Mercurius’ weapons had gone missing. History records that he received a wound from a spear that had pierced his liver and intestines, suffering a major hemorrhage from the wound which killed him.

Permanent link to this article: https://luisapiccarreta.com/122-feast-of-our-lady-of-didinia/