12/11 Tomorrow Is The Feast of Our Lady of Guadalupe

12/12 Feast Day of Our Lady of Guadalupe

Our Lady of Guadalupe – Queen of the Divine Will

Our Lord Jesus Christ to the Servant of God, Luisa Piccarreta, The Little Daughter of the Divine Will

Our Lord:  …”Here, then, is the reason why We (Triune God) constituted Her (Blessed Mother) Queen of all; because when We operate, We do it with reason, wisdom and justice:  She never gave life to Her human will, but Our Will was always intact in Her.  How could We say to another creature:  ‘You are Queen of the heavens, of the sun, of the stars, etc.’, if instead of having Our Will as dominion, she were dominated by her human will?  All the elements, the heavens, the sun, the earth, would have withdrawn from the regime and dominion of this creature.  All would have cried out in their mute language:  ‘We do not want her, we are superior to her, because we have never withdrawn from Your Eternal Volition – as You created us, so we are’.  So would the sun have cried out with its light, the stars with their twinkling, the sea with its waves, and everything else.  On the contrary, as soon as they (all Creation) all felt the dominion of this excelling Virgin (Blessed Mother) who, almost as their sister, never wanted to know Her own will, but only that of God, not only did they make feast, but they felt honored to have their Queen, and they ran around Her to form Her cortege and to pay obsequies to Her – the moon, by placing itself as footstool at Her feet; the stars as crown, the sun as diadem, the Angels as servants, and men as though in waiting.  Everyone – everyone paid Her honor and rendered their obsequies to Her.  There is no honor and glory which cannot be given to Our Will – whether acting within Us, in Its own center, or dwelling in the creature.

Our Lady of Guadalupe 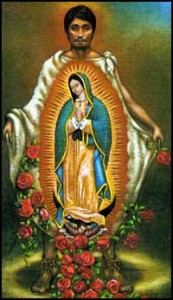 Mesoamerica, the New World, 1521: The capital city of the Aztec empire falls under the Spanish forces. Less than 20 years later, 9 million of the inhabitants of the land, who professed for centuries a polytheistic and human sacrificing religion, are converted to Christianity. What happened in those times that produced such an incredible and historically unprecedented conversion?

In 1531 a “Lady from Heaven” appeared to a humble Native American at Tepeyac, a hill northwest of what is now Mexico City.
She identified herself as the ever virgin Holy Mary, Mother of the True God for whom we live, of the Creator of all things, Lord of heaven and the earth.
She made a request for a church to be built on the site, and submitted her wish to the local Bishop. When the Bishop hesitated, and requested her for a sign, the Mother of God obeyed without delay or question to the Church’s local Bishop, and sent her native messenger to the top of the hill in mid-December to gather an assortment of roses for the Bishop.
After complying to the Bishop’s request for a sign, She also left for us an image of herself imprinted miraculously on the native’s tilma, a poor quality cactus-cloth, which should have deteriorated in 20 years but shows no sign of decay 483 years later and still defies all explanations of its origin.
It apparently even reflects in Her eyes what was in front of her in 1531.
Her message of love and compassion, and her universal promise of help and protection to all mankind, as well as the story of the apparitions, are described in the “Nican Mopohua”, a 16th century document written in the native Nahuatl language.
There is reason to believe that at Tepeyac Mary came in her glorified body, and her actual physical hands rearranged the roses in Juan Diego’s tilma, which makes this apparition very special.
An incredible list of miracles, cures and interventions are attributed to Her. Yearly, between 18 – 20 million pilgrims visit the Basilica, making it Christianity’s most visited sanctuary.
Altogether 25 popes have officially honored Our Lady of Guadalupe. His Holiness John Paul II visited her Sanctuary four times: on his first apostolic trip outside Rome as Pope in 1979, and again in 1990, 1999 and 2002.
The Feast of Our Lady of Guadalupe is celebrated on December 12th. In 1999, Pope John Paul II, in his homily from the Solemn Mass at the Basilica of Our Lady of Guadalupe, during his third visit to the sanctuary, declared the date of December the 12th as a Liturgical Holy Day for the whole continent.
During the same visit Pope John Paul II entrusted the cause of life to her loving protection, and placed under her motherly care the innocent lives of children, especially those who are in danger of not being born.

Permanent link to this article: https://luisapiccarreta.com/1212-feast-day-of-our-lady-of-guadalupe/