12/12 Music on the Mantle of the Virgin Mary 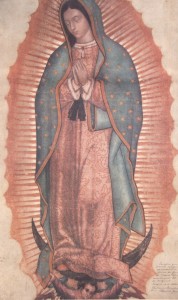 “A great sign appeared in the sky, a woman clothed with the sun, with the moon under her feet, and on her head a crown of twelve stars.”  Rev 12:1

Volume 15; December 8, 1922
Our Lord: ...”Here, then, is the reason why We (Triune God) constituted Her (Blessed Mother) Queen of all; because when We operate, We do it with reason, wisdom and justice: She never gave life to Her human will, but Our Will was always intact in Her. How could We say to another creature: ‘You are Queen of the heavens, of the sun, of the stars, etc.’, if instead of having Our Will as dominion, she were dominated by her human will? All the elements, the heavens, the sun, the earth, would have withdrawn from the regime and dominion of this creature. All would have cried out in their mute language: ‘We do not want her, we are superior to her, because we have never withdrawn from Your Eternal Volition – as You created us, so we are’. So would the sun have cried out with its light, the stars with their twinkling, the sea with its waves, and everything else. On the contrary, as soon as they (all Creation) all felt the dominion of this excelling Virgin (Blessed Mother) who, almost as their sister, never wanted to know Her own will, but only that of God, not only did they make feast, but they felt honored to have their Queen, and they ran around Her to form Her cortege and to pay obsequies to Her – the moon, by placing itself as footstool at Her feet; the stars as crown, the sun as diadem, the Angels as servants, and men as though in waiting. Everyone – everyone paid Her honor and rendered their obsequies to Her. There is no honor and glory which cannot be given to Our Will – whether acting within Us, in Its own center, or dwelling in the creature.”

Permanent link to this article: https://luisapiccarreta.com/12-12-feast-of-our-lady-of-guadalupe/