Below is a translation of the testimony given at the 4th International Conference on the Servant of God Luisa Piccarreta in April, 2015.

This is the link to the news,
To view information from local papers in Corato and Bari about this miracle attributed to Luisa.

Further details will be posted as available.

In Florida the first miracle attributed to Luisa Piccarreta, initiated the canonical process.

Acute pneumonia combined with other complications had put the life of Maria Margarita Chavez in serious danger: according to the team that was treating her, she had less than 48 hours of life left. Then the inexplicable cure.
The testimony of Margarita: “Luisa Piccarreta saved my life”
Words of hope from Florida. Margarita has experienced the intercession of Luisa for her recovery.

Acute pneumonia combined with other complications had put the life of Maria Margarita Chavez in serious danger: according to the team that was treating her, she had less than 48 hours left to live. Then the inexplicable cure: “the Tuesday after Easter in 2007, they brought me a relic of Luisa and my lungs started to heal,” she herself recounted at the Congress on the “Divine Will” which was held in April in Corato. An element that could be important in the process of beatification of the Servant of God, known more in the world that in her hometown.

For this reason, Bishop Pichierri asked the association dedicated to Luisa to begin the “canonical process” to “collect the first testimonies” before some of the main characters are gone. The main reference is the mother of Maria Margarita, who is now elderly.

“To respond to this invitation – confirms Sabino Lastella, president of the association Luisa Piccarreta – we are committed to the due process to be in the diocese of residence of Chavez, and that is in Miami, Florida.”

In late May, the bishop of Miami, Mgr. Thomas Wenski, gave his approval, and “at this time we are contacting those who are part of the ecclesiastical tribunal,” added Lastella. The interviews will be held: between December and January twelve witnesses should be heard. “Soon we will have a final schedule – Lastella continued – and at the conclusion of the work it is expected to take two days to meet and discuss in Miami, it still being the year of the 150th anniversary of the birth of Luisa.”

Once the whole file with all the seals of the Archbishop of Miami is prepared, it will be forwarded to the Congregation for the Cause of Saints through the postulation.

To understand what this entails in the cause of beatification. we turned to Father Sergio Pellegrini, spiritual advisor for the Little children of the Divine will. “When the verification of the writings of Luisa (still in progress) is completed, the Cause will begin, and it will produce the Positio, an annotated biography needed so that the venerability of Luisa is recognized.” Only then what science now calls a miracle “carry out its immediate effect in regard to the beatification” confirms Father Sergio.

So that one can talk about a miracle recognized by the Church requires the approval of the Congregation for the Causes of Saints. “The testimonies will be evaluated – explained Father Sergio – and any further investigations that the congregation will want to make.”

The story of Margherita. Born in Cuba on May 18, 1959, she lives in Miami with her mother Dolores and her son Christopher. April 4, 2007 – during Holy Week, as she herself wished to point out – she was hospitalized in the intensive care unit of the hospital in Miami and in the care of doctor Mario Almeida who in 2006 had treated her bronchopneumonia found on her return from a trip to Italy. “I went to Italy to visit the places where Luisa lived and to meet Sister Assunta” said Margherita during the Congress.

On April 6, the clinical picture of the woman continued to worsen, and the doctors decided to intubate and do a lung biopsy. Connected to an artificial respirator, Margarita went into a coma after receiving the sacraments of confession and anointing of the sick.

On April 10, the Tuesday of the week before Easter, Father Cioffi put a relic of Luisa on the chest of Margherita, while around her they were reading the prayers and writings of Luisa. The next day the first unexplained improvements were seen on x-ray: in a few days Margherita began to breathe on her own and could serenely face also the third kidney transplant.

In her state of unconsciousness Margarita remembers: “The Lord showed me the intrinsic evil of humanity. I was in a place of the elderly and the dying without being able to move, the workers took advantage of us, they gave sleeping pills to have no trouble. I still recall the images of a place where they were preparing the bodies of the dead people. As I was lying on a table, the Lord Jesus let me hear the illicit and malicious conversations of those who were around me. They put me in a coffin, leaving out an arm. The coffin was too small, my body would not fit. The pain I felt was very intense.

A man dressed in a white coat came, and I began to pray: “Jesus, have mercy on me.” The more I prayed the more the man squeezed my hand. It was such a long time: the man was hammering my arm to try to close the coffin, it lasted a long time. The man told me that if I had stopped asking mercy of Jesus, he would have left me alone: I did not stop praying. Then, finally, I found myself in front of our Lord Jesus Christ who said to me: “Child, your sins are forgiven.” Immediately, I saw and felt out of me like a smoke, a breath, a black shadow. My body felt very light. I felt clean.”

Storm Luisa with your prayers 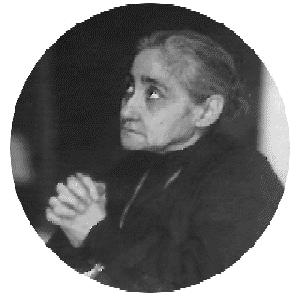 If we wish the Servant of God Luisa Piccarreta
to continue, and even hasten,
her ascent to the glory of the altar,
let us give Luisa a chance to perform first class miracles.
Luisa’s holiness and the favors already granted should impregnate our supplications
with unquenchable confidence.
It is certainly permissible to pray to Luisa in our daily needs,
but let us not be afraid to implore real miracles from her.
Let us invoke Luisa or have her invoked in cases of fatal maladies,
wherein science has to declare itself powerless.
That is when Luisa Piccarreta
will be able to display the prodigious power of her intercession.

For the glory of God and of Luisa Piccarreta, kindly write out the favors obtained,
sign them, with two witnesses, if possible, and send to:

The third edition of “The Towers of Corato”, was held on Saturday, November 14. It was an evening of awards organized by LO STRADONE newspaper. The purpose of this initiative is the knowledge of those people from Corato who excel in their respective professions giving prestige to our town. Also this year, the majority of these excellences came from the most important cities in the country and abroad.

The Municipal Theatre of Corato that hosted the event was crowded, with the participation also of the Consul General of Venezuela, Amarilys Gutierrez Graffe.

The event, which had as its theme “creativity”, opened with the notes of the famous tune of the Marseillaise  to commemorate the victims of the terrorist attacks that took place in recent days in Paris. Marina Labartino, vice-director of LO STRADONE, presented the event with Luigi Di Zanni, versatile artist

The eight winners of this edition are:

Domenico Petrone: founder and president of Viasat Group. Tarshito (Sanskrit: thirst for inner knowledge): his first name Nicola Strippoli, architect, artist and designer. His creative genius derived from his meeting with the spiritual dimension of India. Nicolas Vangi: cosmopolitan artist, painter and teacher of art therapy for the Epilepsy Foundation of Florida. The biggest lesson arising from his creative work is that you can turn a disease into a virtue. Epilepsy, that distress him for years, was also one of his first sources of inspiration. Art is catharsis and therapy, positivity and joy of living. Gregorio Sgarra: artist of international renown,  he is famous for his sacred icons and his paintings both classic and modern. Mariateresa Padula: set designer and decorator of environments. Her decors adorned famous movies and plays. Pino Leone: fashion photographer, ready to capture beauty in people and nature. Luigi Quinto: sculptor; he is very known for his original and precious wooden works especially with religious subjects. Some of his most significant works are four wooden sculptures, the largest in the world. Arcangela Gallo: embroideress of the ‘tombolo’ (lace making). She developed a passion for this ancient art of bobbin lace since she was very young. This ancient tradition is now in danger of extinction, so Arcangela aims to set up an association in Corato that could bring it back to life. Her fine laces adorn the most beautiful trousseaus of young brides.

In this respect, her testimony is very significant. She said that before starting work, she prays  another her fellow citizen, who shared with her the same love for this art: the Servant of God Luisa Piccarreta, born in 1865 and died in 1947 in the odor of holiness. Luisa, in fact, supported herself with her work of ‘tombolo’. She welcomed the girls who wanted to learn that art, and  through art she taught spirituality. Arcangela asks Luisa to work together, as well as Luisa asked Jesus not to leave her alone. In fact, one day, while the servant of God was working, she physically felt a hand moving inside her hand: it was Jesus who was accomplishing her acts.

On the initiative of AIC  (Association of Entrepreneurs from Corato), a Special Prize was awarded to a young girl graduate for her thesis on the theme “business and industry of Puglia”. In this connection, Dr. Marina Mastromauro, administrator of the Pasta Factory Granoro,  granted a scholarship named after her father, Attilio Mastromauro, founder of the Pasta Factory  who died recently, but still alive in the memory of the people of Corato.

“A dream remains so until you decide to make it happen” was adopted as a significant maxim by LO STRADONE throughout this event, as Marina Labartino said, with the intention to encourage young people to pursue their own objectives even if they are difficult and ambitious, following the example of the guest awarded, who have shown that thanks to their persistent efforts and their firm determination it is possible to overcome any obstacle and achieve positive results.

Permanent link to this article: https://luisapiccarreta.com/1124-luisa-piccarreta-saved-my-life/