THE GLORY THAT THE SOUL WILL RECEIVE IN HEAVEN

11/21 Feast of the Presentation of the Blessed Virgin Mary

11/20/1994 Anniversary of the Opening of the Cause of Beatification and Canonization of the Servant of God, Luisa Piccarreta

“Most dear ones, even now we are the sons of God, but that which we will be has not yet been revealed. We know then that when He will be manifested, we will be similar to Him because we will see Him as He is.”  I John 3:2

On the Solemnity of Christ the King, 20 November, 1994 in the Mother church of Corato, Mons. Carmelo Cassati, Archbishop of Trani-Barletta-Bisceglie, having received the Non Obstare issued by the Congregation for the Causes of Saints, blessed the opening of the Cause of Beatification and Canonization of the Servant of God Luisa Piccarreta, secular third order Dominican. With the Archbishop himself as president of the Ecclesiastical Tribunal, joined by enthusiastic faithful from southern Italy and around the world, Luisa began her triumphal journey toward the Honors of the Altar.

On October 29, 2005, the conclusion of the Diocesan Phase of the  Cause of Beatification and Canonization of the Servant of God, Luisa Piccarreta,  was officially celebrated and transferred to the Vatican. 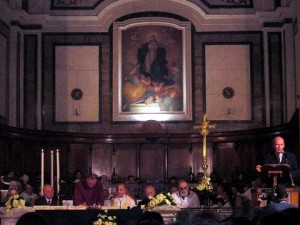 Whoever has received particular  graces attributed to the intercession of the Servant of God Luisa Piccarreta is requested to write to:

“For I reckon that the sufferings of this time are not worthy to be compared with the glory to come, that shall be revealed in us. For the expectation of the creature waiteth for the revelation of the sons of God. For the creature was made subject to vanity, not willingly, but by reason of him that made it subject, in hope: Because the creature also itself shall be delivered from the servitude of corruption, into the liberty of the glory of the children of God.”
Romans 8:18-21

Permanent link to this article: https://luisapiccarreta.com/11201994-anniversary-of-the-opening-of-the-cause-of-beatification-and-canonization-of-the-servant-of-god-luisa-piccarreta/