11/21 Feast of the Presentation of the Blessed Virgin Mary 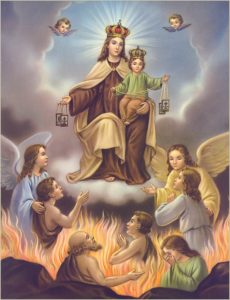 The importance of All Souls Day was made clear by Pope Benedict XV (1914-22) when he granted all priests the privilege of celebrating three Masses on All Souls Day: one for the faithful departed; one for the priest’s intentions; and one for the intentions of the Holy Father. On only a handful of other very important feast days are priests allowed to celebrate more than two Masses.

While All Souls Day is now paired with All Saints Day (November 1), which celebrates all of the faithful who are in Heaven, it originally was celebrated in the Easter season, around Pentecost Sunday (and still is in the Eastern Catholic Churches). By the tenth century, the celebration had been moved to October; and  ometime between 998 and 1030, St. Odilo of Cluny decreed that it should be celebrated on November 2 in all of the monasteries of his Benedictine congregation. Over the next two centuries, other Benedictines and the Carthusians began to celebrate it in their monasteries as well, and soon the commemoration of all the Holy Souls in Purgatory spread to the entire Church. Offering Our Efforts on Behalf of the Holy Souls On All Souls Day, we not only remember the dead, but we apply our efforts, through prayer, almsgiving, and the Mass, to their release from Purgatory. There are two plenary indulgences attached to All Souls Day, one for visiting a church and another for visiting a cemetery. (The plenary indulgence for visiting a cemetery can also be obtained every day from November 1-8, and, as a partial indulgence, on any day of the year.) While the actions are performed by the living, the merits of the indulgences are applicable only to the souls in Purgatory. Since a plenary indulgence removes all of the temporal punishment for sin, which is the reason why souls are in Purgatory in the first place, applying a plenary indulgence to one of the Holy Souls in Purgatory means that the Holy Soul is released from Purgatory and enters Heaven.

Praying for the dead is a Christian obligation. In the modern world, when many have come to doubt the Church’s teaching on Purgatory, the need for such prayers has only increased. The Church devotes the month of November to prayer for the Holy Souls in Purgatory, and participation in the Mass of All Souls Day is a good way to begin the month. 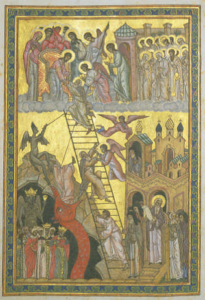 …Then I remained alone again, without Jesus, and I poured myself out with my sweet Mama, crying and praying Her to make Jesus come back to me. My Mama told me: “My sweet daughter, do not cry. You must thank Jesus for the way He comports Himself with you and for the grace He gives you, not allowing that you move away from His Most Holy Will in these times of chastisements. Greater grace He could not give you.”

Afterwards, Jesus came back, and seeing that I had cried, He told me: “Why have you cried?” And I:

‘I cried with my Mama, I did not cry with anyone else; and I did it because You were not here.’ And Jesus, taking my hands in His, seemed to mitigate my pains, and then He showed me two high stairways, from earth up to Heaven. On one of them there were more people – very few on the other. The one on which there were only few people was of solid gold, and it seemed that those few who were going up were as many other Jesuses – each one of them was one Jesus. The other one, on which there were more people, seemed to be made of wood and one could distinguish who the people were – almost all of them short and not very developed.

Jesus told me: “My daughter, those who lived their lives in my Life ascend on the golden stairway; so I can say: ‘They are my feet, my hands, my Heart – the whole of Myself.’ As you can see, they are another Me – they are all for Me, and I am their life. Their actions are all of gold and of incalculable value, because they are divine. No one will ever be able to reach their height because they are my very Life. Almost without anyone knowing them, because they are hidden in Me, only in Heaven will they be perfectly known. On the wooden stairway there are more souls; these are the souls who walk along the way of the virtues, yes, but not in union with my Life and with the continuous connection of my Will. Their actions are of wood, therefore their value is minimal. These souls are short, almost scrawny, because many human purposes are mixed in with their good actions, and human purposes produce no growth. They are known to everyone, because they are not hidden in Me, but in themselves, therefore no one covers them. They will not cause any surprise for Heaven, since they were known also on earth. Therefore, my daughter, I want you completely in my Life, with nothing in yours, and I entrust to you the ones you know and see, that they may keep themselves strong and constant on the stairway of my Life.” He pointed to me someone whom I know, and disappeared. May everything be for His glory

Permanent link to this article: https://luisapiccarreta.com/11-2-all-souls-day/