10/5 On October 5, 1938 Sister Faustina died in a Convent of the Congregation of Sisters of Our Lady of Mercy in Cracow, Poland

10/7 FEAST OF OUR LADY OF THE HOLY ROSARY 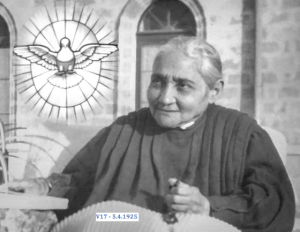 The Servant of God, Luisa Piccarreta the Little Daughter of the Divine Will
Outside the House of the Sisters of the Congregation of Divine Zeal
in Corato, Italy
(Notice the rosary in her left hand)

The following excerpts are from
“A Collection of Memories of the Servant of God Luisa Piccarreta” by Fr. Bucci.

…On October 7, 1928, when the house of the Sisters of the Congregation of Divine Zeal in Corato was ready, Luisa was taken to the Convent in accordance with the wishes of Saint Annibale Di Francia. Saint Annibale had already died in the odor of sanctity in Messina.
(Saint Anniable Maria Di Francia died on June 1, 1927 A.D., comforted by a vision of the Blessed Virgin Mary, whom he so dearly loved. On October 7, 1990 he was declared “Blessed” by Pope John Paul II. He was canonized on May 16, 2004, by Pope John Paul II.)

… On October 7, 1938, because of orders from above, Luisa was obliged to leave the convent and find a new place to live. She spent the last nine years of her life in a house in Via Maddalena, a place which the elderly of Corato know well and from where, on
March 8, 1947, they saw her body carried out.

Luisa, the terror of demonic forces

… One lady said that she had gone to live in a house at
Rotondella in the Province of Matera, where she had been appointed to teach at  an elementary school. However, she had felt very ill at ease in that house  because there was frequently a man in it with a terrible look who would try to  grab her; but the lady defended herself by holding up the rosary she had in her  hands; at the sight of it he would flee. The distraught lady left everything and  returned to Corato with her children. No one believed the poor soul and she was  thought to be out of her mind, especially by her husband who had Masonic  leanings. Completely at a loss as to what she should do, she went to see Luisa,  who listened to her kindly, comforted her, told her not to be frightened because  the devil had no power over her, and urged her to return to her work. The lady  took her advice, but wanted to take a photograph of Luisa with her: she had it  framed and put it on her bedside table. One evening, while she was reciting the  Holy Rosary with her children, she saw the man again. He approached the bed,  took the picture of Luisa, threw it on the floor and fled shrieking. From that  moment nothing further happened; peace and serenity returned to the house. The  photograph of Luisa which had been violently thrown on the floor was not  damaged, indeed the glass did not even break. This framed photograph is now in  the house of the lady’s daughter-in-law, on her bedside table. …

… After dinner, Luisa would retire to meditate and pray for about three hours. In the late afternoon several pious women, among whom were the sisters Cimadomo, and they began to pray the holy Rosary in its entirety, with meditations that Luisa had on the Divine Will.

After everyone had left, Luisa would close herself in prayer. Her little room was closed and during this time she daily, in obedience to the directives of her confessor who had ordered her to write everything down without neglecting a single detail, she would write down that which occurred between herself and Our Lord.

Book of Heaven
The Call of the Creature to the Order, the Place and the Purpose
for which He was Created by God

Then, the evening came of this day consecrated to the Queen of the Rosary (October 7, 1928), Queen of Victories and of Triumphs.  And this is another Beautiful Sign that, just as the Sovereign Lady (the Blessed Virgin Mary) conquered Her Creator, and bejeweling Him with Her chains of love, She drew Him from Heaven to earth, to make Him form the Kingdom of Redemption, so will the sweet and powerful beads of Her Rosary make Her Victorious and Triumphant again before the Divinity, conquering the Kingdom of the Divine Fiat, to make It come into the midst of creatures. 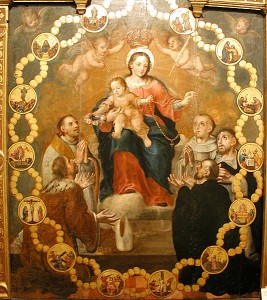 Posted in d October 2011, Prayers, Novenas and Feast Days, The Divine Will of God

Permanent link to this article: https://luisapiccarreta.com/107-feast-of-our-lady-of-the-holy-rosary-2/